I know that we still have three and a bit good reading months left in 2017, but even having a quarter of a year left won’t stop me from getting excited about books coming in 2018. Publishers work quite far in advance (most of the time) and it’s not a surprise to start seeing 2018 proof/reading copies floating around on Instagram and Twitter. I’ve been lucky enough to get my hands on a few exciting 2018 titles already but I haven’t read any of them yet… I’m not *quite* ready to let go of 2017. Here are 10 books already on my 2018 TBR pile that I’m looking forward to reading soon. 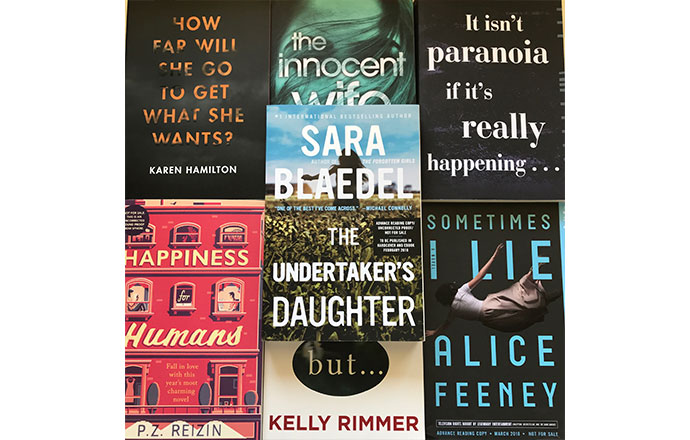 1. The Undertaker’s Daughter by Sara Blaedel

I got a copy of this at Book Expo a few months ago and immediately added it to my 2018 TBR pile. I picked it up solely based on the title and cover (Sara Blaedel hasn’t had a book published in Australian since 2014, so her name didn’t instantly click for me). It’s the story of Ilka Jensen, a school portrait photographer who lives in Copenhagen, whose life is turned upside down when her estranged father dies and bequeaths his Wisconsin-based funeral home to her. Once Ilka arrives in America, a murder and a mystery ensue and this book got some serious Book Expo buzz so I’m excited to read it. At this point in time, it doesn’t have an Australian publisher but it will be released in America in early February 2018. Check it out on Goodreads here. (It’s worth noting now that while most of this don’t have Australian release dates yet, it doesn’t mean that they won’t at all. I’ll do my best to keep them as up to date as possible.)

This is another Book Expo pick that I’m very excited about and it’s also well and truly towards the top of my 2018 TBR pile. For as much as a book further on down this list sounds like it was inspired by Stephen King, this debut novel from A.J. Finn sounds like it was inspired by one of my favourite Alfred Hitchcock films Rear Window. Anna Fox, a recluse, lives alone and refuses to venture outside. Instead, she drinks time and spies on her neighbours. She’s the ultimate unreliable narrator (kind of like Rachel in The Girl on the Train but with a pill problem to boot) and I expect this to make for some gripping and thrilling reading. It got huge buzz at Book Expo so I hope it will be one of the biggest summer thrillers here! It’ll be out mid-January in Australia and a fortnight earlier overseas. Check it out on Goodreads here.

3. Watch Me by Jody Gehrman

This isn’t Jody Gehrman’s first rodeo–she’s the author of 11 novels–but this is her first suspense novel. You all know how much I love mysteries and thrillers that focus on authors and books within books, so it won’t surprise you that I’m keen on this one. In it, a struggling creative writing professor in her late 30s who attracts the focus of a talented student named Sam. Sam is a supremely talented author with a penchant for dark themes, but from what I can gather from the blurb Sam screams STALKER and I am already hoping that this book will live up to my expectations. No Australian release date yet but it’s hitting US shelves towards the end of January 2018. Check it out on Goodreads here.

4. The Perfect Girlfriend by Karen Hamilton

2018 is shaping up to be another big year for psychological thrillers and in particular debut thrillers! This is Karen Hamilton’s first novel and it’s about a woman’s obsession to win back the man who broke her heart. The main theme here is obsession but from what I can gather, it’s the sort of obsession that can flip from loving to hate-filled and dangerous within the blink of an eye, which I’m sure will make for fun reading. Early reviews suggest that even though the main character Juliette is quite unhinged, she’s still really likeable and I’m very interested to see how the author pulls that off. It’s a February 2018 release here in Australia, and March 2018 overseas. Check it out on Goodreads here.

5. The Innocent Wife by Amy Lloyd

From the perfect girlfriend to the innocent wife… This sounds so good and it’s probably the book at the top of my 2018 TBR pile. Twenty years ago, Dennis Danson was arrested for murder and is now receiving the Steven Avery treatment in a Making a Murderer-style documentary. As with Avery, in this (purely fictional) documentary the filmmakers are creating a huge frenzy about the possibility of Danson’s innocence, and this captures the attention of Samantha half a world away in Britain. Samantha falls for the story of Danson’s innocence and for Danson himself and soon leaves her life behind to campaign for his innocence. If you don’t want to know more than that, don’t read the blurb further as it does give away more of the story. My recommendation is to dive headfirst into this book knowing as little as possible. The author Amy Lloyd won the Daily Mail and Penguin Random House First Novel competition in 2016 with this manuscript, and it’s released here in Australia at the beginning of January 2018. It’s out a month later in the US. Check it out on Goodreads here (but beware the blurb is slightly spoilery).

6. Happiness for Humans by P.J. Reizin

The blurb of this book says it will appeal to fans of The Rosie Project and Sleepless in Seattle–I tick both those boxes enthusiastically, so I am very excited to read P.Z. Reizin’s debut novel and there’s no surprise really that it’s on my 2018 TBR pile. It’s the story of Jen and Tom and a match-making artificial intelligence piece of tech wizardry called Aiden (not to be confused with AIDAN from the Illuminae Files, although apparently a hostile AI gets involved as well). What is the secret to human happiness? Aiden has some ideas, and I can’t wait to find out if it’s right. Find it on both Australian and American shelves in mid-January 2018. Check it out on Goodreads here.

7. Before I Let You Go by Kelly Rimmer

This one I don’t know a great deal about, but I was lucky enough to meet the author Kelly in Sydney earlier this month and she was one of the nicest people I’ve ever met, and I think this book will be huge in 2018. Kelly is the author of five previous novels but this is her first novel in print, and although heart-wrenching family dramas aren’t usually in my wheelhouse this one has a fairly gripping dilemma at its core and I’m interested to see how Kelly handles such sensitive and topical subject matter. It’s published in Australia at the end of February 2018 and in early April 2018 overseas. Check it out on Goodreads here.

This is Corinne Sullivan’s debut novel and it’s already starting to pick up some buzz as a smart and sexy exploration of class, sex, and gender. Imogene Abney is a shy and introverted young woman who, soon after she graduates from college, is offered a teaching position at an all-boys prep school in Westchester, New York. She has little teaching experience and even less experience with boys, but she’s been fascinated by the elite world of prep schools since she was a child, so naturally she accepts the position. It’s not spoiling anything (it’s in the blurb) to say that Imogene begins an affair with one of her students, and it sounds like the fallout from the affair will make for juicy and thrilling reading. At this stage, it’s slated for an April 2018 release here in Australia and March 2018 in the US. Check it out on Goodreads here.

If you market a book as ‘the must-read thriller of 2018’, you will absolutely get my attention and also get your book onto my 2018 TBR pile. The Chalk Man opens n 1986, and picks up again with one of the characters, Eddie, in 2016. Alternating between past and present, it tells the chilling story of a secret childhood game that turns into something far more sinister; something that follows the children in 1986 into adulthood in shocking fashion. Apparently, this novel was inspired by a tub of chalk that a friend brought over for the author’s daughter’s birthday party. They drew chalk figures all over the driveway, but in the dark they looked incredibly sinister… you get the idea. This has already pricked my ‘sounds like it was influenced by Stephen King’ sense, and I really hope I’m not disappointed with it! Happily, this has an Australian release date already and it will be available both here and overseas at the beginning of January 2018. Check it out on Goodreads here.

10. The Female Persuasion by Meg Wolitzer

My dreams came true when a new Meg Wolitzer novel was announced for 2018, as it’ll be her first adult novel since one of my favourites The Interestings in 2013 (Belzhar was published in 2014 but I wasn’t its biggest fan). This book is about woman and power, focussing on one woman named Greer Kadetsky and the three relationships that determine the course of her life. I can’t summarise this book better than the blurb can, so go seek it out for yourself and add it to your 2018 TBR while you’re at it. There’s no Australian release date yet, which is unsurprising as it’s not out until April 2018 in America, but hopefully we won’t be too far away from that date in Australia. Check it out on Goodreads here.

There we have it! Those are 10 of the books on my 2018 radar so far. Do any of them interest you? I’m slowly starting to prepare my 2018 previews (like the posts I wrote for 2017 books) so leave me a comment and let me know about the 2018 titles that you think should be on the list.