At the end of every year I celebrate the books that I loved during those 12 months. In 2017 I read 90 books and picked my favourite 17 (you can find out which books I chose here) but in writing that post I got to thinking about the books published in 2017 that I was excited to read but never actually read. I found that many of the books I was sad I’d missed where on loads of best of 2017 lists, which only made me sadder that I’d missed them. I figured I’d write about them so that a) I won’t forget about them and b) maybe you can shame me into finally reading them. Without further ado, here are the 10 books I wish I read in 2017 and my reasons why I chose each book. 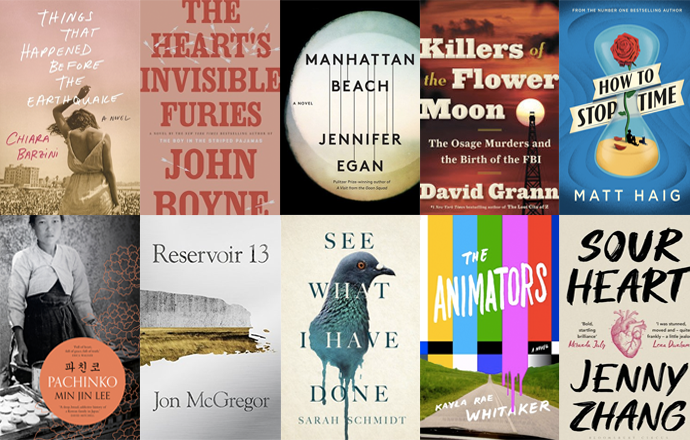 Things That Happened Before the Earthquake by Chiara Barzini [GR] I 100% judged this book by its cover. This debut novel is a coming-of-age story set in early 1990s Los Angeles and it sounded like something I would really enjoy, but I didn’t actually buy a copy until the end of the year. By that time I was scrambling to read many other 2017 books and this one got overlooked.

The Heart’s Invisible Furies by John Boyne [GR] As you can tell from this list there are a few books I’m sad that I missed this year, but John Boyne’s novel sits firmly at the top of the pile. (The only reason it’s not at the actual top of this list is because I’m organising it alphabetically.) This book was on nearly every best of 2017 list that I saw and it made me acutely aware that I have missed one of the great books of 2017. Also I’ve gone with the American cover in the image for this post because I think it’s infinitely nicer than the ANZ/UK cover.

Manhattan Beach by Jennifer Egan [GR] How much will you hate me if I admit that not only have I had a copy of this book since May but also it’s a signed copy (I met Jennifer Egan at Book Expo) and I still haven’t read it? I’m sorry I disappoint you so much. If it’s any consolation, I hate me too for being so slack. I hear it’s a brilliant book and I don’t think I even need to say that I know I need to read this one.

Killers of the Flower Moon by David Grann [GR] This is an interesting one because it didn’t make much noise in Australia, but for a brief period of time around its American release in April this book was everywhere for me. I heard about it on podcasts and I saw it over and over again on Twitter and Instagram. Naturally, it was one of the first books I bought when we landed in America in May and I’m still yet to find out what all the fuss is about.

How to Stop Time by Matt Haig [GR] Seeing this book on so many best of 2017 lists has made me so frustrated that I didn’t make the time to read it in 2017. It sounds beautiful and moving and truly I have no good reason for not reading it the second I got my hands on a copy.

Pachinko by Min Jin Lee [GR] I remember hearing about this book for the first time roughly one year ago, when all those most anticipated books of 2017 lists were published. It’s the kind of book you hear about and think yes I would like to read this because I’m fairly certain it will make me a better reader and then I blew it by not reading it.

Reservoir 13 by Jon McGregor [GR] I’m still not 100% sure why I want to read this book, if I’m being honest. It was a Man Booker Prize contender and it’s essentially a mystery (from what I can gather), and I’m always intrigued by mysteries that end of up on the Booker list. I don’t know if I’ll get to this one soon, but I do hope to read it at some point.

See What I Have Done by Sarah Schmidt [GR] Admitting that I haven’t read this book yet could probably get me fired (not really, but it’d come close!) but despite everyone’s best efforts, this book came out at a time when I was so angry with reading and I never picked it up once my reading slump ended. I promise I will read this soon.

The Animators by Kayla Rae Whitaker [GR] If John Boyne wrote my #1 missed book of 2017 then Kayla Rae Whitaker wrote #2. I was so excited to read this book that I even included it in my own most anticipated books of 2017 list and yet I still never read it. Apparently it’s marvellous and I did see it on many a best of 2017 list, so I will endeavour to right my wrong this year.

Sour Heart by Jenny Zhang [GR] I was excited about this short story collection from the minute I heard about it. It was the first book published under Lena Dunham’s imprint Lenny, and while I do not care much for Lena this collection sounded fantastic. I have a copy and hope to get to it soon.

It’s also worth noting here that there were two books that a) I really wanted to read and did in fact try to read, and b) I know lots of other people loved, but unfortunately I couldn’t get into them enough to finish them. One was Autumn by Ali Smith and the other was Lincoln in the Bardo by George Saunders. I don’t know if I’ll ever give Lincoln another shot (a big part of me thinks I need to make peace with the fact that it’s simply not for me) but I will give Autumn another go one day. Even if I don’t love it, I would like to at least read it in full.

So those are my 10 books I wish I read in 2017. Did you miss any of these as well, or are there some books on this list that you absolutely adored? Leave a comment and let me know!