I can’t believe it’s the final afternoon of 2017 already. Seriously, where the heck did this year go? I have miraculously reached my Goodreads goal of 90 books (!!!) but reading 90 books in a single year has made it nearly impossible to pick my favourite books. I have picked my 17 favourite books from 2017 and getting it to 17 was hard enough; some are books published this year, some are books published many years ago, and some are going to be published in 2018.

According to Goodreads, I read the equivalent of 30,281 pages this year. (Some of the books I finished were audiobooks.) Of the 90 books I read this year, only 17 of them were written by men. My shift towards reading more books written by female authors has been an unconscious one but it’s also been immensely satisfying. I hope it will continue in 2018. It’s also worth noting that of the 90 books I read, 25 were written by Australian authors. I’m not super happy with that stat, to be honest. I will do my best to support more local authors next year. Finally, my split between fiction and non-fiction is 76 and 14. This doesn’t surprise me and I absolutely prefer fiction, but happily it is more non-fiction than I read in 2016 and I hope to read more of it again in 2018. 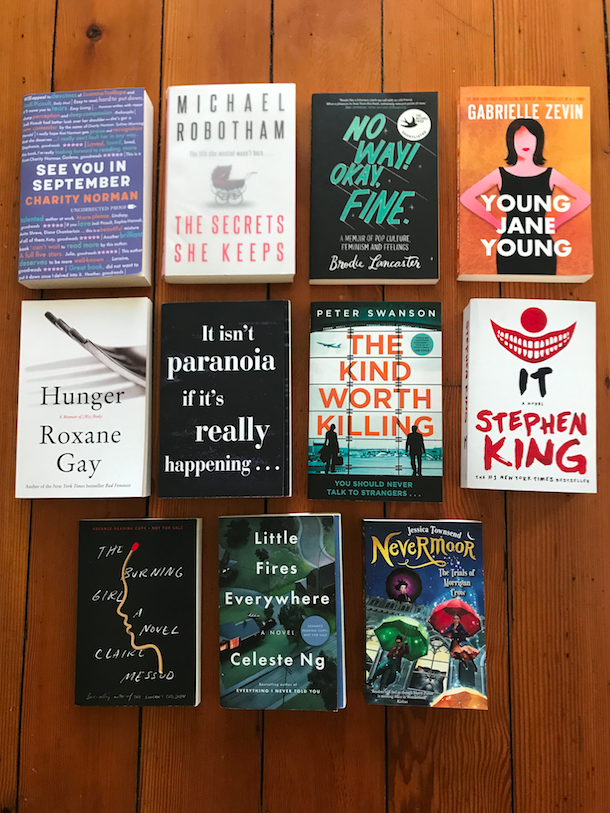 Hunger by Roxane Gay [GR] 5★ The most heartbreaking memoir I’ve read in a long time. Roxane Gay is a treasure and this book is a must-read.

The Girl in Kellers Way by Megan Goldin [GR] 5★ One of the smartest thrillers that I read this year (the other one is a little further down in this list). It’s seriously beyond impressive that this is her debut! I can’t wait to read what she writes next.

No Way! Okay, Fine by Brodie Lancaster [GR] 5★ Brodie is the wise, witty, and talented sister that I never had but always wanted. I’ll basically read anything she writes.

The Burning Girl by Claire Messud [GR] 5★ Teen girl relationships are a tricky thing to fictionalise without trivialising or belittling the characters, and Claire Messud handles the complexity of female friendship during adolescence with insightfulness, grace, and a searing honesty that I haven’t come across in fiction in a long time.

Little Fires Everywhere by Celeste Ng [GR] 5★ Everyone loves this book and I am no exception — it’s definitely in my top five for the year. It’s compelling and captivating story about family ties and the lengths people go to protect the ones they love.

See You in September by Charity Norman [GR] 5★ This is a fictional story about a girl getting caught up in a cult in New Zealand, but there were times while I was reading it that I had to remind myself that it was, in fact, fiction. Charity Norman’s writing is incredible and while I wouldn’t go as far as calling this a thriller, it’s magnificently unsettling and tense.

The Secrets She Keeps by Michael Robotham [GR] 5★ This bloody incredible thriller is told from the perspective of two women; one has a seemingly perfect life, and the other covets that life beyond the point of obsession. Every now and then I still think about how obsessed I was with this book while I was reading it, and that to me is the sign of a truly great book.

Nevermoor by Jessica Townsend [GR] 5★ I’m definitely not the target market for this book, but it’s books like these that make me angry at the entire concept of a target market in the first place. This book is pure fun. It’s a delight to read and one of the most enjoyable books of the year, and I’d recommend it to anyone irrespective of their age.

Young Jane Young by Gabrielle Zevin [GR] 5★ This book managed to be brilliant and wise and funny all at once. It’s true that it’s the story of the wildly loveable Aviva Grossman, but it becomes so much more than that. It’s about slut-shaming and victim-blaming and the internet and politics and family and love. It was a joy to read.

The Princess Diarist by Carrie Fisher [GR] 4★ I listened to this memoir just after Carrie died and I cried. A lot. The audiobook is narrated by Carrie and that’s the way I’d suggest you take in this story. It’s moving and heartbreaking at times but one of the funniest books I read all year. I miss you, Carrie.

It by Stephen King [GR] 5★ I read this book over the space of a week and while I wouldn’t recommend that to anyone else, this book was my favourite reading experience of the year. I completely inhaled this book and loved almost all of it… you can probably the guess the part I wasn’t such a huge fan of!

You Are a Badass by Jen Sincero [GR] 4★ This was the best self-help book I dipped into during 2017. Jen is positive and uplifting, and while there’s nothing groundbreaking in this book it’s an inspirational read and I definitely benefited from this book’s presence in my life.

The Kind Worth Killing by Peter Swanson [GR] 5★ This book was smart with a capital S. I was annoyed that it took me so long to read this book and if you’ve been umm-ing and ahh-ing over picking it up, don’t delay any longer. Just do it!

The Woman in Cabin 10 by Ruth Ware [GR] 4★ I know this book doesn’t have a 5-star rating but it’s the one I remember as my most tense read of 2017. It has the element of unreliable narrator, in that no one in the story believes what the narrator is saying, along with the element of isolation: the bulk of the book is set on a small boat. So good!

The year ahead (books published in 2018 to look out for)

How Do You Like Me Now by Holly Bourne [GR] 5★ I adore this book and I think it’s going to be huge in 2018. It’s not out until June, but do everything you can to get your hands on a copy of this book as soon as possible! This book has the most relatable female character I think I’ve ever read. Seriously I saw so much of myself and my friends in this book and I think if you’re a woman on the internet right now you will too.

The Woman in the Window by A.J. Finn [GR] 5★ This book got huge buzz at Book Expo and when I finally got around to reading it, I understood why! It’s subtle and smart and (I hate this word so much but it’s totally justified here) unputdownable. I read it in a single day because I had to know what would happen at the end. Look out for it in January!

Shelter in Place by Nora Roberts [GR] 5★ I love my standalone Nora Roberts romantic suspense books, but this was next level Nora. The opening scenes involve a mass shooting at a shopping centre and I was in tears as the violence and sheer devastation unfolded. What follows is a poignant and moving story of shared trauma and recovery, with a side of mystery thrown in. Someone is killing people who survived the shooting… but why??

I read 90 books this year. This is all of them, from most recently read to the first book of 2017. (The one without a cover next to Holly Bourne is Shelter in Place.) 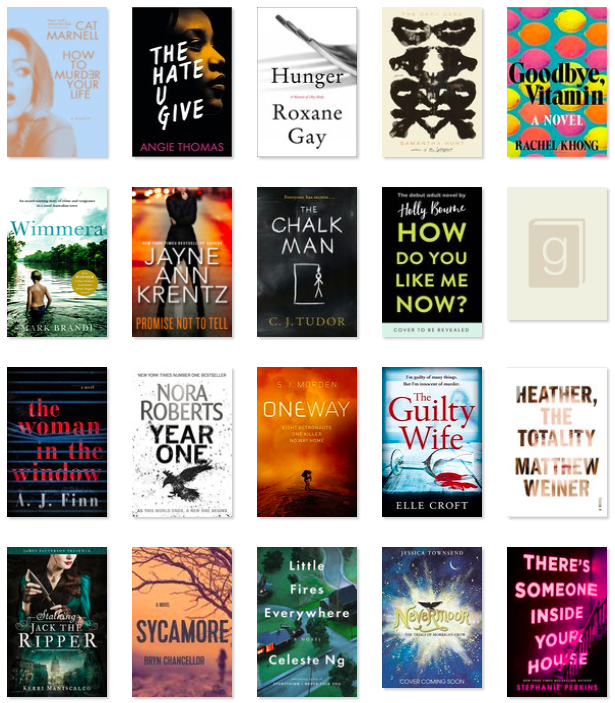 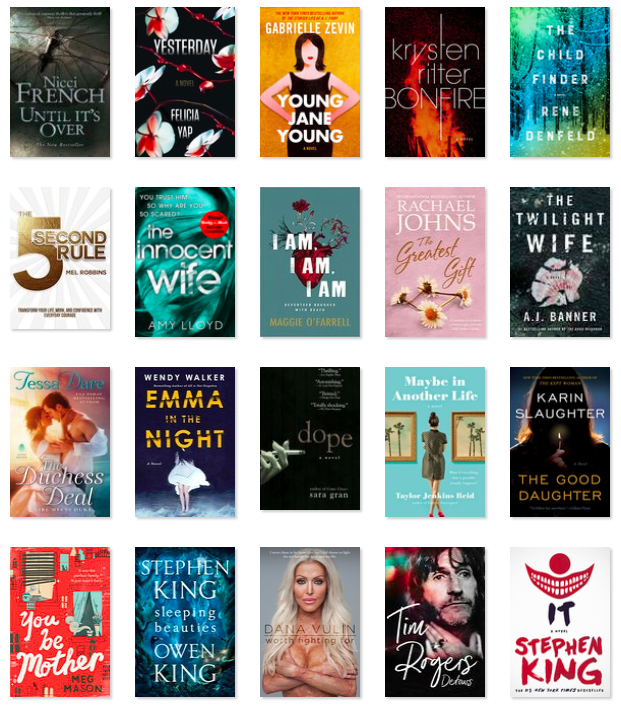 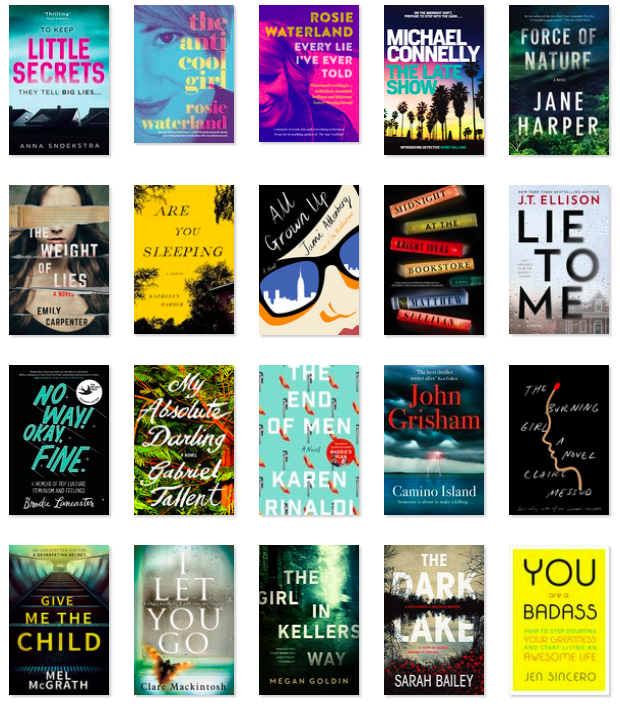 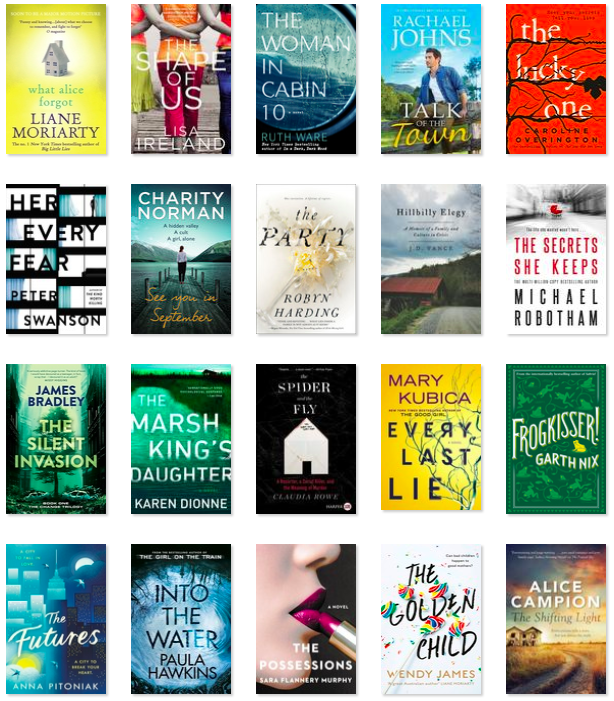 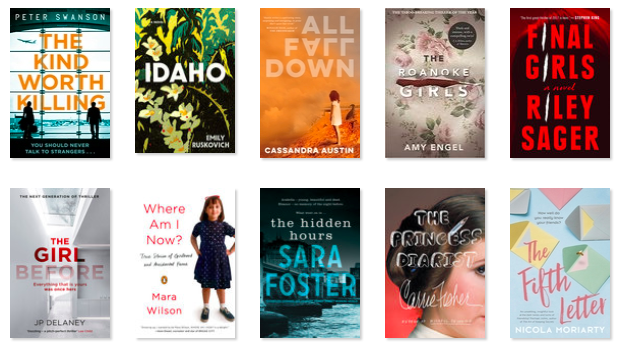 Here’s to another brilliant year of reading in 2018!