My August 2017 reading review will be a lot shorter than last month’s because instead of reading ten books I only read five. Though, to be fair, if you add two of the books I read this month together, it comes in at close to 2000 pages. So, you know. That’s something! Bloody Stephen King… 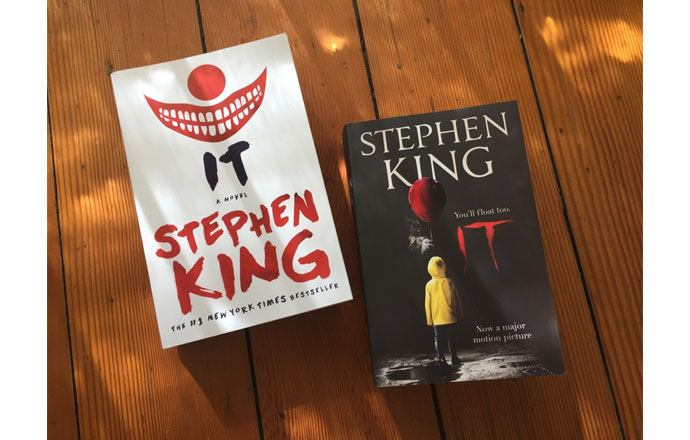 It by Stephen King [GR]
I read this book in a week. Yep, you read that right. I smashed through 1168 pages in seven days. It was a huge effort, and one of the most intense reading experiences of my life. This book is a glorious, entertaining, frightful mess and I mean that in the nicest possible way. There’s not a whole lot more I can say that you wouldn’t already know about this book but for me, Pennywise wasn’t the scariest part, though it definitely was present in the scene I found creepiest. It was most unsettling during the children’s section in the 1950s when they felt like the adults were oblivious to what was going on. I know how the feeling of being isolated as a child, but fortunately I wasn’t battling a centuries-old demon. 5★
Detours by Tim Rogers [GR]
I’m not a massive You Am I fan but that didn’t stop me from devouring this gem of a literary memoir from Aussie rock legend Tim Rogers. In all honesty, I probably wouldn’t have read this book if it weren’t for podcast prep (you can check out Tim’s episode here) but I’m so glad I did. As Tim says in the podcast, this isn’t the tell-all, no holds barred story of life in a band. If you buy him a beer at a pub, he’ll tell you that story himself. This is a series of vignettes about his life and how he sees the world, and they’re a perfect blend of happy, sad, uplifting, and downright heartbreaking storytelling. Tim is at once just like us and not like us at all, and it’s a privilege to get a glimpse into his beautiful, troubled mind. 4★
Worth Fighting For by Dana Vulin [GR]
The horrific attack on Dana Vulin was national news five years ago–Dana was set alight in her own home by a mentally ill woman who believed Dana was having an affair with her estranged husband. Miraculously, Dana survived but her journey was far from over. This book was both the heaviest and most uplifting book I’ve read this year. Dana has endured unthinkable pain and trauma, and yet she has risen above all of it to survive and thrive. Her message is one of love, not hate, and it’s impossible not to be inspired by her positivity and above all else her ability to forgive.  4★
Sleeping Beauties by Stephen King and Owen King [GR]
I was beyond lucky to be one of the first people in Australia to read this book, and it’s really, really good. I haven’t read a new Stephen King epic since Under the Dome was published in 2009 and I loved every minute of devouring this novel. It’s a smart and entertaining book, and I attribute the former to the younger King and the latter to the older. Either that or Stephen is just 100% done with US politics and he no longer cares how political his books get. The political and social commentary in this book is not subtle but to me, at no point did it feel like they were forcing a particular ideology down my throat. The character list is long and slightly cumbersome to begin with, but as with any Stephen King epic you get the hang of it after a while. I suspect this book will be a bit divisive, so I look forward to hearing what other readers think of it. 4★
You be Mother by Meg Mason [GR]
After a King-heavy month, this book was a welcome relief. I identified with the main character, Abi, in many ways. She moves to Sydney (albeit from London, whereas I moved from just up the road in Brisbane) after unexpectedly falling pregnant to an exchange student, and really struggles with homesickness and loneliness. I suffered this as well, and still do to a certain extent at times, and I was on Abi’s side from the start. Her journey is full of ups and downs. She navigates new motherhood, mostly alone, she finds it hard to make friends, she struggles with her partner’s mother, and when she does finally make a good friend the situation becomes more complicated than anyone ever imagined. It’s a fun, light read that was a fun way to end the month. 4★
All in all a strong but slow month of reading. I hope September will be better, or else I won’t have a chance of reaching my Goodreads target of 90 books!