This post was an absolute joy to write. And by ‘joy’ I mean ‘a complete pain in the ass’, because I read so many brilliant books in 2015 and took zero notes for any of them. No reviews, no flagged passages, nada. Good work, Tonile.

In light of this, please forgive me if my reasons for adding a book to this list are vague beyond ‘it’s brilliant, just read it’. I assure you 2016 will be a better year for all things books and reviews. Also, crucially, there were a few books that I either a) started and didn’t finish for whatever reason or b) own but didn’t start at all that have been heavily featured in other best of 2015 lists. In no particular order, they are The Natural Way of Things, A Little Life, A Guide to Berlin, and My Brilliant Friend. I’m disappointed that I wasn’t able to tick any of these off, as I’m sure this list would be somewhat different if I had. 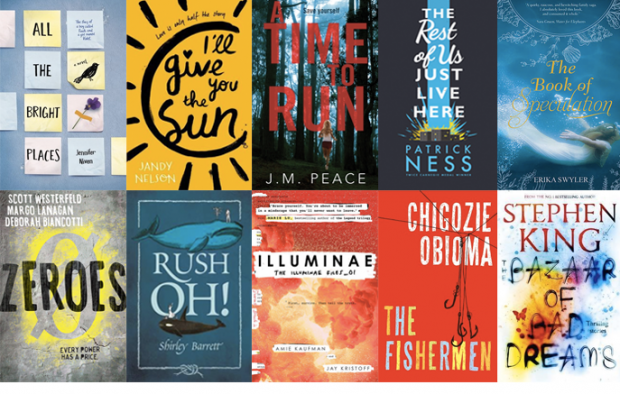 (Ranked in order of when each book was read)

All the Bright Places by Jennifer Niven.
I read this poignant and moving contemporary YA novel in January 2015 and loved it immensely. For me, it handled teenage mental health issues and first love with a grace and beauty that was mostly lacking in other YA novels. Niven has a writing style that I warmed to quickly, and it completely stood up to the challenge of being compared to other YA heavyweights The Fault in Our Stars and Eleanor & Park.

I’ll Give You the Sun by Jandy Nelson.
It took me a while to warm to this book, as the author uses loads of sometimes-ridiculous metaphors and POV switches frequently, along with switches from past to present. The writing style put me off for nearly half the book, but I smashed through the second half as the story took over. At its core this book is about the myriad of different relationships people can have, and about finding comfort in your quirks and oddities.

A Time to Run by J.M. Peace.
Fortunately I had the good sense to review this book in full back in July 2015. No other crime novel I read in 2015 came close to affecting me the way this book did, and it will take something quite special to make me feel as strongly about a debut crime novel again.

The Rest of Us Just Live Here by Patrick Ness.
This was the first Patrick Ness novel I had ever read, and it convinced me to track down some of his other books almost immediately. Take a walk down the young adult section of any good book store and you’ll be greeted by many a popular heroine or hero, but gosh it’s tiresome always being the chosen one. What about the rest of us who just happen to live here while all the day-saving goes on around us? Part mockery of YA dystopian tropes, part achingly sincere YA coming of age story, this book will always sit close to my heart.

The Book of Speculation by Erica Swyler.
This was the second knocked-my-socks-off debut novel I read in 2015. It’s a dual-narrative tale set both in the current day and in the past, though the historical story slowly creeps towards the current day. With a solid dose of magical realism, carnivals, curses, and mystery, Swyler’s debut is the story of a man who uncovers an unsettling historical trait that has haunted the women in his family for generations. His haste to solve the mystery and prevent another family member falling victim to the mistakes of generations past helped me speed through this book in just over a day.

Zeroes by Scott Westerfeld, Margo Lanagan, and Deborah Biancotti.
Zeroes is the first in a trilogy and is just so much fun. Seriously, my only Goodreads note for this one says ‘if I could give it 6 stars, I would’. It’s the story of six not-heroes who all possess crowd-based powers, and how these powers both unite them and tear them apart. I won’t lie; part of the fun is trying to guess which two characters each author was responsible for writing, and I was also really fortunate to record a podcast with the authors for work, which you can listen to here.

Rush Oh! by Shirley Barrett
If you had told me at the start of 2015 that one of my favourite books of the year was going to be a historical novel about a whaling family, I would have laughed at you. And a debut novel, no less! Shirley Barrett surprised and delighted me with the utterly charming story about an Australian whaling family living in Eden, NSW, that is actually based on a real family. Mary is a gorgeous and feisty narrator, and her spirit will stay with you long after you finish the book. Shirley is another author I was lucky enough to podcast with! You can listen here if you wish.

Illuminae by Amie Kaufman and Jay Kristoff.
I don’t think I can go into too much detail about this book in a summary-style list, but that’s okay because there are hundreds of reviews online that absolutely sing the (well deserved) praise for this book. It’s just shy of 600 pages and it’s a giant of a book, but it’s well worth the time investment. It’s told in epistolary format, which I adore, through a series of briefing notes, chat logs, classified documents, computer logs, interviews, and more. It’s also the first in a new trilogy, and it’s doing wonderful things all over the world. Podcast is here should you like to hear it.

The Fishermen by Chigozie Obioma.
Told from the point of view of nine-year-old Benjamin, The Fishermen is the story of four brothers growing up in Nigeria in the 1990s. When their father has to move away for work, the brothers defy their local village superstitions and go fishing in the forbidden river. There, they encounter a local madman known for his chillingly accurate prophecies who tells them that the oldest brother Ikenna will be murdered by one of the other three. This book is slow to start, but Obioma’s prose is so haunting and beautiful that readers can’t help but be drawn in by his mythical and mysterious storytelling. Obioma’s deep appreciation of the English language all but overflows from the pages, and while the story is bleak, Obioma’s future certainly is not.

The Bazaar of Bad Dreams by Stephen King.
While I was able to podcast with some of my favourite authors of 2015, the closest I got to Stephen King was meeting the digital marketing manager at his publishing house in the UK. Actually, this is pretty bloody close, now that I think about it. Bazaar is King’s latest collection of short stories and it’s an absolute treasure. I laughed, I cried, I shuddered, I wrinkled up my nose in revulsion. I love Stephen King, and irrespective of whether I’m reading an 800+ page novel or a collection of short stories, his writing blows me away.

An honourable mention for 2015 is Eligible by Curtis Sittenfeld. I wanted to include this book so badly since I did read it in 2015, but it’s not released until 2016 so I’ll save it for my 2016 list. No matter what else I read this year, I have no doubt that this modern-day retelling of Pride and Prejudice (!!!) will be in my top 10 at the end of the year. This isn’t the last time I’m going to gush about this book, so prepare yourselves!

Did you write a list of your favourite 2015 books? Leave the link in a comment — I’d love to check it out!