January is typically a slow publishing month and February in my mind marks the start of the 2017 publishing year. I’ve decided to start a monthly feature that highlights new books coming out that month. This is by no means an exhaustive list, so leave me a comment if I’ve left off anything that you’re super excited about. Without further ado, I present to you a big book preview of February 2017 book releases. 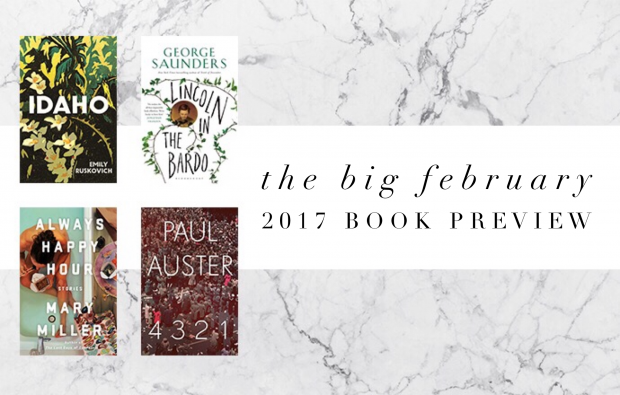 The Ninth Grave by Stephen Arnhem

The Shifting Light by Alice Campion {The sequel to 2016’s The Painted Sky.}

Rattle by Fiona Cummins {I mentioned this in my 2017 preview because it features a serial killer that’s apparently more frightening than Hannibal Lecter. Sure thing!}

The Girl Before by JP Delaney

If You Knew Her by Emily Elgar

Storm and Grace by Kathryn Heyman

A Child’s Book of True Crime by Chloe Hooper {I had no idea this was coming and it sounded straight up amazing. Turns out it’s a re-release of Chloe’s first novel! It’s about the collapse of a teacher’s life as she continues an affair with the father of her most gifted student.}

The Nowhere Man by Gregg Hurwitz

Behind Her Eyes by Sarah Pinborough

Echoes in Death by J.D. Robb

Enigma Variations: A Novel by Andre Aciman {Due mid-Feb.}

4 3 2 1 by Paul Auster {The first novel from Paul Auster in seven years has everyone very excited. Apparently, it’s a masterpiece!}

All Fall Down by Cassandra Austin

The Massacre of Mankind by Stephen Baxter {The authorised sequel to The War of the Worlds.}

How Not to Fall in Love, Actually by Catherine Bennetto

Huck Out West by Robert Coover {Only available from overseas. It’s an interpretation of what happened after the events of Mark Twain’s Huckleberry Finn.}

The Antiques by Kris D’Agostino

Universal Harvester by John Darnielle {Only available from overseas, with an Australian publication date of April. I wrote about this in my 2017 preview and I’m so desperate to read this that I’ll probably pay a fortune and order this before it’s released here.}

Shadowbahn by Steve Erickson {Only available from overseas, and due mid-Feb.}

The Possessions by Sarah Flannery Murphy {I also wrote about this in my 2017 preview, and it’s a ghost story that I’m super excited to get my hands on.}

This is How it Always is by Laurie Frankel

The Keeper of Lost Things by Ruth Hogan

The Golden Child by Wendy James

Born of Vengeance by Sherrilyn Kenyon

Hold Back the Stars by Katie Khan

My Not So Perfect Life by Sophie Kinsella

A Separation by Katie Kitamura {Only available from overseas. I’m sad no Australian publisher has picked this one up yet, but I’ll definitely also be ordering this book.}

Pachinko by Min Jin Lee {A Victorian epic transplated to Japan, following a Korean family of immigrants through eight decades and four generations.}

The Burning World by Isaac Marion {Only available from overseas, with an Australian publication date of March. You guys, this is the sequel to Warm Bodies aka one of my favourite books of all time. So. Excited.}

All Our Wrong Todays by Elan Mastai {Only available from overseas, with an Australian publication date of March.}

The Lonely Hearts Hotel by Heather O’Neill {Only available from overseas, with an Australian publication date of March.}

A Book of American Martyrs by Joyce Carol Oates {Only available from overseas, with an Australian publication date of March.}

The Futures by Anna Pitoniak {A witty, clever New York love story that is getting excellent reviews.}

The Impossible Fortress by Jason Rekulak {Only available from overseas.}

Idaho by Emily Ruskovich {I am telling every single person I meet about how much I loved this book.}

Lincoln in the Bardo by George Saunders {The award-winning short story author has written his first novel.}

Before You Go by Clare Swatman {Due mid-Feb.}

City of Friends by Joanna Trollope

The Scandalous Life of Sasha Torte by Lesley Truffle

Things We Lost in the Fire by Mariana Enriquez {This has been described to be as ‘scary short stories’. Count me in!}

Always Happy Hour by Mary Miller {Only available from overseas. Another non-secret is my love for this cover.}

The Refugees by Viet Thanh Nguyen {Due mid-Feb.}

Caraval by Stephanie Garber {The one with the stunning cover.}

A Shadow’s Breath by Nicole Hayes

The Edge of Everything by Jeff Giles

Traitor to the Throne by Alwyn Hamilton

By Your Side by Kasie West {Only available from overseas.}

Why I Am Not a Feminist: A Feminist Manifesto by Jessa Crispin {Due mid-month.}

The Case Against Fragrance by Kate Grenville

How to Murder Your Life by Cat Marnell {Due mid-Feb.}

At the End of the World: A True Story of Murder in the Arctic by Lawrence Millman

The Lost City of the Monkey God by Douglas Preston {I don’t read much non-fiction, but I’ll definitely be making the time for this one.}

The Helen 100 by Helen Razer

Make ‘Em Laugh by Debbie Reynolds and Dorian Hannaway {Cue all the sobbing.}

The Upstarts by Brad Stone {Due mid-Feb.}

Miss these ones in their large trade paperback size? They’re now available in a smaller format!

The Memory Artist by Katherine Brabon

House of the Rising Sun by James Lee Burke

The Painted Sky by Alice Campion

How to Find Love in a Book Shop by Veronica Henry

The World Without Us by Mireille Juchau {This cover!}

A Kiss From Mr Fitzgerald by Natasha Lester

The Toymaker by Liam Pieper

The Language of Dying by Sarah Pinborough

The Trap by Melanie Raabe

The Gustav Sonata by Rose Tremain

And that’s all I’ve got for you! Please leave me a comment and let me know what you think of this list. Would it be better if it was linked to Goodreads maybe? Did you find some new books to get excited about? I hope you found it useful to inspire a big month of reading.

Be sure to check back at the beginning of March for next month’s big book preview. If you’re looking for broader monthly previews, check out my two-part 2017 book preview series here and here. If you want to get the monthly book list emailed directly to your inbox, simply subscribe below!