There are loads of great books out this month, as we learned yesterday in my list of February 2017 new releases. I managed to get through ten books in January, and I’m aiming for a second big month in a row. I present to you my February 2017 reading list of the books I hope to read this month. 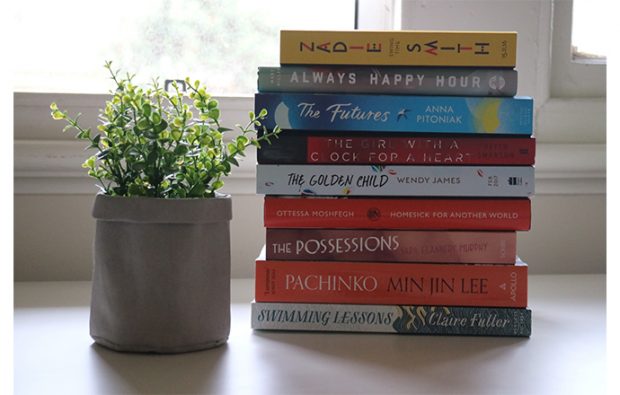 Swimming Lessons by Claire Fuller. I love the idea of this book. A woman writes letters to her husband about the state of their marriage, but instead of giving them to him she hides them in the books they keep in their home. Once the final letter is written, she disappears and leaves behind her husband and two daughters. The concept of leaving letters in books has me hooked already. Read more here.

The Golden Child by Wendy James. This sounds like a Liane Moriarty premise, and it has a cover quote from Liane herself, so I think I’ll enjoy this book. I feel like it has all the makings of a great Australian domestic drama. It’s about teenagers and the parents that raise them, bullying, selfies, schoolyard cliques, and social media. Read more here.

Pachinko by Min Jin Lee. To be honest, historical fiction isn’t really my thing. I’ve heard many good things about this book, and I’m going to give it a shot. It follows one Korean family through the decades and is a sweeping epic. Read more here.

Always Happy Hour by Mary Miller. I’ve been ranting about this collection of short stories for a while now, largely because of the amazing book cover it has been blessed with. My copy arrived a couple of weeks ago, so I’ll definitely read it this month. Read more here.

Homesick for Another World by Ottessa Moshfegh. I didn’t read Ottessa Moshfegh’s first novel last year, but I feel like her collection of short stories will be talked about a lot this year so I want to read them while they’re new. Otherwise, we all know what happens when I buy a book and leave it on my shelf… for years… Anyway, these stories have been described as eery and unsettling and I’m looking forward to reading her work for the first time. Read more here.

The Possessions by Sara Flannery Murphy. Sara Flannery Murphy’s debut novel is getting loads of buzz and I am excited to finally have my copy. It’s essentially a ghost story, I think? I don’t really know, but it sounds great and it’s just been picked as a February selection for Book of the Month, so I’m keen to give it a go. Read more here.

The Futures by Anna Pitoniak. Another debut getting lots of love! This story follows the life of a young couple who moves to New York. The All the Books podcast girls spoke about this back in January, but it’s been on my radar since all those yearly preview books started doing the rounds and I’m glad that it’s finally available. Read more here.

Swing Time by Zadie Smith. I’ve joined a book club and this is our first pick. Really, I should have read it before now. Shame on me. Read more here.

The Girl With A Clock For A Heart by Peter Swanson. I’m low-key obsessed with Peter Swanson now, and I’ve been able to borrow a copy of his first novel. I don’t think will take me long to read. Read more here.

So those are physical books that I have on my shelves, but there are a few I’ve been approved for on NetGalley that I can’t forget about either!

Hold Back the Stars by Katie Khan. This science-fiction book sounds intense and amazing. It’s a debut novel and a love story and set in space. That’s enough to get me interested. Read more here.

The Most Dangerous Place on Earth by Lindsey Lee Johnson. This book was released in January and is yet another debut! So many good debuts are coming out this year, I swear. This is set in a high school and looks at modern adolescence. It’s aimed at an adult audience, though, so I think it may be a bit meatier than a YA novel. Read more here.

The Lonely Hearts Hotel by Heather O’Neill. This book is released in America this month and hits Australian shelves next month, but I (somehow) got accepted for a NetGalley copy. All I need to know is that this has been compared to The Night Circus, so I’ll give it a go. Read more here.

All Our Wrong Todays by Elan Mastai. I can’t believe this is another debut novel that sounds incredible. Seriously, 2017?! This is the story of Tom, who goes to the 2016 we thought we’d be living in back when we imagined it in the 1950s. Think flying cars and moon bases… Except Tom goes from that 2016 to the 2016 we’re familiar with. What a shock that would have been! Read more here.

Her Every Fear by Peter Swanson. Well, this won’t come as a surprise to anyone. Peter Swanson has a new novel out, hooray! Read more here.

I don’t know if I’ll get through all of these, and who knows? Maybe different books will drop into my arms. We have 26 days to figure it out. Leave me a comment and let me know what books you hope to read this month!