Let me just start off by saying that I wish I’d started looking at 2018 books earlier. We are nearly halfway through January and generally a monthly book preview should be published, oh I don’t know, at the beginning of the month, perhaps? In the spirit of embracing perfection and cutting myself some slack, I know I’m the only one who cares as much about when things are posted around here but I’m still sorry it’s taken me this long to put together my January 2018 book edit. For better or worse, I’m glad we’re here.

Now, onto the fun stuff. At the beginning of 2017 I wrote two companion preview posts (you can find them here and here) and not only were they a heck of a lot of work to put together, they’re also not super relevant beyond April because the second half of the year is rather light in terms of publication details. And so, on the first day of January this year, I decided I’d do my preview posts monthly. I’m hopeful February’s list won’t take half the damn month to produce.

January used to be a quiet publishing month but that doesn’t seem to be the case anymore. If I’d been writing this at the beginning of the month I would perhaps have glossed over Fire and Fury by Michael Wolff and we’re not yet a full month into the year and this book is already breaking publishing records. There’s no rhyme or reason as to when these sorts of books will explode (I think the furore over it would have happened irrespective of when it was published, and it’s certainly any publisher’s dream to have such a strong budget performance at the start of a new year), but I think it’s definitely the case that there’s a huge appetite for reading material in January. People are still on holidays, people are looking to start their reading year with a bang, and in 2018 publishers have definitely delivered plenty of reading material to choose from.

A couple of things before we kick off: I will be linking every book to its Goodreads page and every date listed below is the Australian publication date. There are a few instances where a book doesn’t have an Australian publisher and thus doesn’t have a local release date, and I’ve quoted the US release date instead. They have (No AUS date) listed before the description. 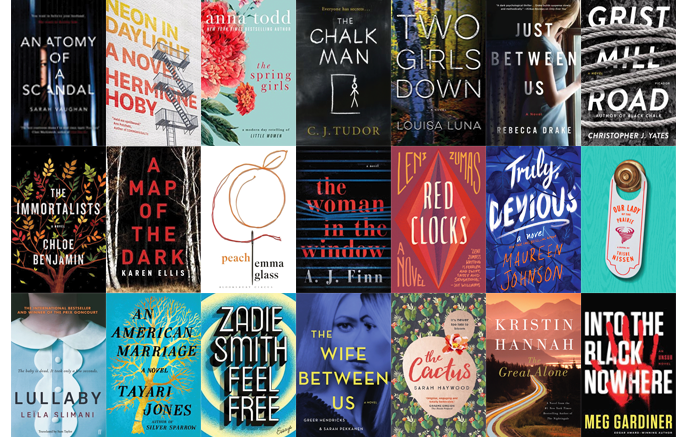 Anatomy of a Scandal by Sarah Vaughan. A suspense novel about the women caught up in a scandal amongst Britain’s privileged elite.

Neon in Daylight by Hermione Hoby (No AUS date). A novel about a British woman finding her way in New York in 2012, before Hurricane Sandy hits.

The Chalk Man by C.J. Tudor. Present and past collide in this thriller that’s equal part coming-of-age story and murder mystery. I didn’t love it as much as others did but it’s getting excellent reviews. 3★ The author was interviewed over at Crime By the Book and you can check that out here.

The Widows of Malabar Hill by Sujata Massey. The first in a historical mystery series about the first female lawyer in Bombay.

If I Die Before I Wake by Emily Koch. Alex is in a coma and while everyone believe he will never wake up, Alex can hear everything. Soon he begins to suspect that the accident that put him into the coma wasn’t an accident at all… This debut novel sounds great.

Fire and Fury by Michael Wolff. The hugely-explosive, record-breaking book about the Trump White House.

Just Between Us by Rebecca Drake (No AUS date). Domestic noir about four suburban mothers and friends who conspire to cover up a deadly crime. I’m genuinely surprised that this doesn’t have an Australian release date.

Grist Mill Road by Christopher J. Yates. A dark and twisty thriller from the author of Black Chalk. Crime by the Book rated it 4.5★; read Abby’s review here.

The Job of the Wasp by Colin Winnette (No AUS date). A coming-of-age tale, a murder mystery, and a ghost story all wrapped into one super interesting book.

The Immortalists by Chloe Benjamin. The story of four siblings who visit a travelling psychic who claims to be able to tell anyone the date they will die. If you were told the date of your death, how would you choose to live? 4★

A Map of the Dark by Karen Ellis. The first in a new FBI series about a woman with a dark past who finds missing people.

The Night Market by Jonathan Moore. Read this description on Goodreads because I seriously can’t explain it easily.

Peach by Emma Glass. A debut novel about the assault of a young woman named Peach and the days following the attack as she tries to make sense of what has happened to her.

Heart on Fire by Amanda Bouchet. The third and final book in the Kingmaker Chronicles.

Iron Gold by Pierce Brown. The fourth book in the Red Rising series.

Two Girls Down by Louisa Luna. Two girls disappear from a parking lot in a small Pennsylvanian town and their mother hires an enigmatic bounty hunter to find them.

The Woman in the Window by A.J. Finn. If Gillian Flynn and Alfred Hitchcock had collaborated, this book would have been what they produced. I loved it. 5★ Check out the author’s interview with Crime By the Book here.

The Infinite Future by Tim Wirkus. About an obsessive librarian, an author, and a disgraced historian who go on the hunt for a mythical, life-changing book… and find it.

Apart in the Dark: Novellas by Ania Ahlborn (No AUS date). Two novellas in one collection from a Polish horror author. Enough said!

The Wolves of Winter by Tyrell Johnson. A debut post-apocalyptic novel that follows a woman as she searches for answers in a frightening world that, strangely enough, doesn’t seem like much of an impossibility anymore.

Red Clocks by Leni Zumas. An imaginative novel about motherhood, identity, and freedom in the vein of The Handmaid’s Tale and The Power. Check out the NPR review here.

Best Friends Forever by Margot Hunt. A domestic noir thriller about the power of female friendships and how destructive they can be when they fall apart.

This Could Hurt by Jillian Medoff. A novel about 5 HR colleagues trying to balance ambition, hope, and fear as their small company is buffeted by economic forces that threaten to upend them. I’ve read that it’s perfect for fans of The Nest, of which I am! Check out what NPR had to say about it here.

Truly Devious by Maureen Johnson. A YA mystery about a true crime aficionado with a mysterious past who attends a prestigious private school for high achievers. I can’t wait to read this.

Say You’ll Remember Me by Katie McGarry. A YA novel about Drix and Elle, two very different people who come together with the odds stacked against them. I can’t think about this book without the Taylor Swift song popping into my head.

Our Lady of the Prairie by Thisbe Nissen (No AUS date). A novel about a midwestern theatre professor who returns home after teaching a semester away and tries to reconcile who she was with who she is now.

This Love Story Will Self-Destruct by Leslie Cohen (No AUS date). The classic tale of boy meets girl, girl goes home with someone else. A debut that sounds delightful.

The Sky is Yours by Chandler Klang Smith (No AUS date). A debut novel set in a dystopian metropolis plagued by dragons. Sure!

The Other Side of Everything by Lauren Doyle Owens (No AUS date). Laura Lippman meets Megan Abbott in this literary debut about three generations of neighbours whose lives intersect in the aftermath of a crime.

Lullaby by Leila Slimani. The number one French bestseller, translated to English of course, set in contemporary Paris. This has been published in the US with the same jacket titled The Perfect Nanny. Leila Slimani was interviewed by NPR and you can check out the interview highlights here or check out Crime By the Book’s 4★ review here.

The Wedding Date by Jasmine Guillory. What happens when an emergency +1 for a wedding sticks around.

An American Marriage by Tayari Jones. Newlyweds Celestial and Roy are torn apart when Roy is arrested and sentenced to 12 years in prison for a crime Celestial knows he didn’t commit. I am so looking forward to this one.

Feel Free: Essays by Zadie Smith. Arranged into five sections: In the World, In the Audience, In the Gallery, On the Bookshelf, and Feel Free. Fuck yeah, I am keen for this.

The Adulterants by Joe Dunthorne. The book that would be a coming-of-age story if its protagonist could only forget that he’s 33 years old.

Everything Here is Beautiful by Mira T. Lee. A debut novel that’s getting many good reviews about two sisters, focussing on mental illness.

The Monk of Mokha by Dave Eggers. A moving non-fiction story from the author of The Circle.

This Could Change Everything by Jill Mansell. A private letter goes viral, aka my worst nightmare.

The Cage by Lloyd Jones. The author of Mister Pip is back with a dark novel of violence and imprisonment.

Need to Know by Karen Cleveland. A CIA counterintelligence analyst is assigned to uncover the leaders of Russian sleeper cells in the US.

The Hazel Wood by Melissa Albert. A debut YA thriller crossed with the darkest of fairytales.

The Wife Between Us by Greer Hendricks and Sarah Pekkanen. The buzz for this book was already huge in Mary 2017 at Book Expo and this is being heralded as one of the biggest thrillers of 2018.

Thirteen by Steve Cavanagh. Eddie Flynn’s fourth outing with the best premise ever: the serial killer isn’t on trial; he’s on the jury!

The Afterlives by Thomas Pierce. The debut novel from the National Book Award 5 Under 35 winner

The Feed by Nick Clark Windo. For fans of Station Eleven and The Girl With All The Gifts.

The Cactus by Sarah Haywood. It’s never too late to bloom!

The Great Alone by Kristin Hannah. A story of a family in crisis struggling to survive at the edge of the world.

Into the Black Nowhere by Meg Gardiner (No AUS date). I absolutely adored 2017’s Unsub (5★) and I’m still really surprised that Penguin Random hasn’t published this book in Australia. This is easily my most anticipated book of January.

The Curious History of Dating: From Jane Austen to Tinder by Nichi Hodgson. Covering everything from the rules of Regency courtship to swiping right.

If you think January had some great books in it, just wait until we get to February. (I’m happy to report that I’m already working on that list at the moment!) Which January new releases are you most eager to read?