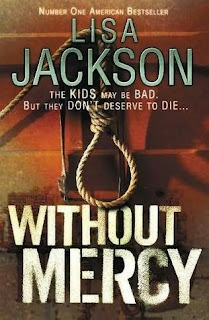 When I was in high school, there was one word that sent shivers down my spine… discourse. It’s a dirty, horrible word that English teachers adore. The word seemed to work its way into every assignment and exam, and we all hated it. There is one assignment that stands out as the most bearable and it consisted of watching a film and analysing how technical effects work to promote a specific shudder discourse. I chose Darkness Falls and analysed how moviemakers create what is effectively a dark and scary mood using techniques to influence how an audience responds. I couldn’t help but think back to this assignment when I worked my way to the climax of Jackson’s 2010 thriller Without Mercy.

Isolated location? Check.
Mysterious disappearances and deaths? Check.
A shadowy figure lurking in the dark? Check.
A storm, isolating a location entirely? Check.
All the atmosphere for a ripping thriller to kick off 2011? Check!

I wholeheartedly loved this novel. It was the first Lisa Jackson novel I’ve read and it is the start of many. The best-selling author, most notably recognised for her romance and romantic suspense novels, has a writing style I find similar to authors such as Karen Rose and Nora Roberts, however Without Mercy is unlike anything I’ve ever read before. This novel would have its fair share of critics, with their most notable criticism being the cliche elements listed above. For me though, it really added to the atmosphere of the book, allowing me to get very involved in the storyline.

Julia “Jules” Farentino has been to hell and back, coping with the brutal murder of her father in a home invasion that she witnessed as a child. With broken relationships behind her and no job, her life is at an apparent standstill. She has coped with the trauma better than her younger half-sister Shaylee Stillman who, after her recent indiscretion, is given the option of either a reform school or jail time. School is the obvious choice, and Shay is shipped off to Blue Rock Academy. The school is currently dealing with the negative publicity of a missing student and this causes alarm bells for Jules, who is even more put off Blue Rock after doing some investigating of her own. When a teaching position opens at Blue Rock, Jules applies and is offered the position.

What follows is a well-written, fast-paced thriller featuring an over bearing Reverend who happens to be in charge at the school, an ex-boyfriend cop-turned-PI, a mysterious figure who lurks in the darkness, and over-zealous students who are afraid of everything and nothing at the same time. Jackson’s winning tactic in this book is exposing the twisted relationships and power struggles in an isolated community. It worked for Stephen King in Under the Dome and it worked again here. And the twist at the end is bloody mind-blowing.