Last year, @booksandlala, @paigespageskc, and @shannon_said organised the inaugural Spookathon readathon. I participated and had a great time, and I am really excited to see it back in 2017. Spookathon 2017 kicks off tomorrow (Monday October 16) and runs until Sunday October 22, and just like last year there are some spooky reading challenges to tick off.

You can read as many (or as few) books as you want, and I’ve found three books that each tick off at least two of the challenges. What am I reading during Spookathon 2017? Let’s take a look! 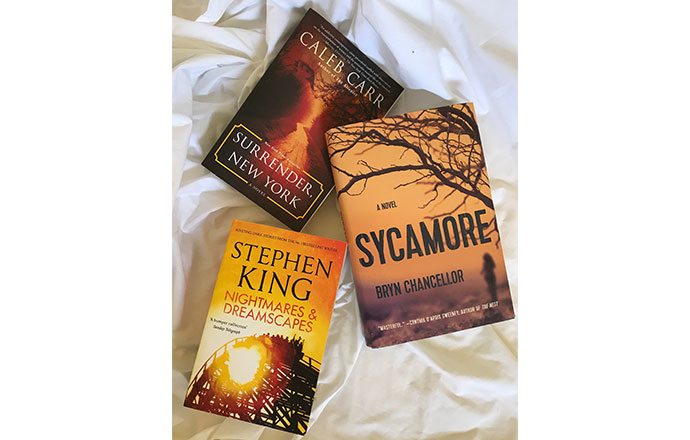 I picked up this book in San Francisco back in May because it sounded super creepy. It also had a staff recommendation under it, and I take those things seriously! It’s a thriller about a criminal psychologist and a trace evidence expert who are called in to consult on a case in Burgoyne County, New York. Young boys and girls are being murdered in disturbing ways, and while it sounds awful it also sounds awesome… exactly the kind of book I love! It ticks off 3 of the 5 challenges: it’s a thriller, it has orange on the cover, and it touches on a childhood fear of mine. When I was younger, I was terrified that I’d be abandoned, so some of this will be hard to read I’m sure.

This is another book I picked up on my US trip earlier this year. I got it from one of my favourite bookstores, Strand Book Store. The cover caught my eye (I 100% judged this book by its cover) and the blurb was equally intriguing. It’s about a small town called Sycamore, Arizona, that is shaken to its core when human remains are discovered by a newcomer on a hike. Like Surrender New York, Sycamore also ticks off 3 of the 5 challenges: it’s a thriller, it has an orange cover, and it has a spooky setting.

I did not buy this book in America! I love Stephen King’s short stories, and this collection is one I have not read yet. There are 20 short stories, one teleplay, one poem, and one non-fiction piece in this book. I am hoping it will be a good change of pace from the two other novels I hope to read during Spookathon. Just for something different, this book ticks off 3 of the 5 challenges: it has a spooky word in the title (nightmares), it has an orange cover, and it has a spooky setting (not all of the stories will, but some will for sure).

That’s it! I am not certain that I’ll get through three books in a week, but I’m going to give it my best shot. Follow along with Spookathon 2017 on Twitter and with the hashtag #Spookathon. I’ll be tweeting along during the week so keep in touch with me as I track my process