Welcome to my February 2018 reading recap where I get to look back over a fun month of reading! I read six books this month, which I was a little bit disappointed with. This year I’m really trying to balance my reading life and make sure I’m reading for fun without it feeling stressful, but at the same time I have a never-ending pile of books to read and I definitely need to get through more than six books a month. During March I’ll be trying to read more and will be aiming for seven/eight books. 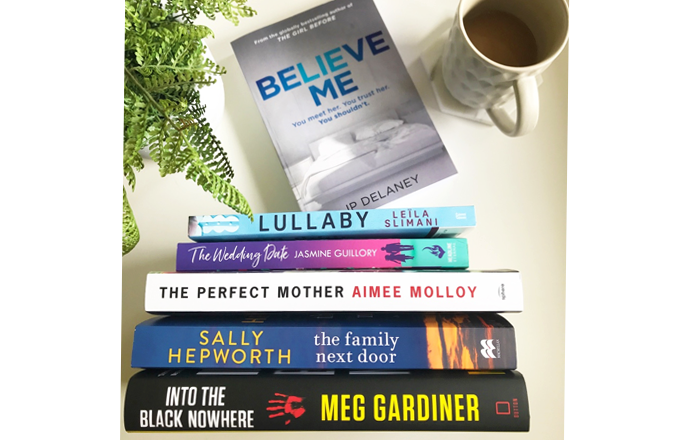 Into the Black Nowhere by Meg Gardiner [GR]
These thrillers couldn’t be smarter or better. This is by far my favourite crime series at the moment and I’m already desperate for book 3… too bad I have to wait until 2019! Caitlin Hendrix is back in book 2 as a trainee profiler following her exceptional work in book 1, and this time the story is told more in the style of a psychological thriller as readers are introduced to the suspect early on. This doesn’t make it any less chilling or tense than Unsub, though; where Unsub was inspired by the Zodiac Killer, this one was inspired by Ted Bundy. By the end of this book, the stage is set for a phenomenal book 3 that currently has a tentative title of The Dark Corners of the Night. 5★
The Wedding Date by Jasmine Guillory [GR]
If I had to summarise this book in five words (to match my five-star rating, of course!) I would say: smart and sexy romantic fun. This book starts the ultimate meet-cute: a girl and a boy get stuck in an elevator. By the time they are set free, Drew has asked Alexa to be an emergency date to a wedding he’s attending and despite her reservations Alexa has said yes. I don’t want to spoil the delightful details of this novel, but I will add that I’ve never seen a more realistic depiction in a book of how much people and I was 100% there for it. If you’ve ever read a book and wondered ‘but when do they eat?’ then this is the book for you. 4★
Lullaby by Leila Slimani [GR]
I had high hopes for this but ultimately didn’t love it. The book opens with a fairly horrifying murder scene, which (please don’t read into this) got me excited for what was to come, but I quickly felt like the opening was the strongest part of the book. I struggle to rate translations that I don’t enjoy because I don’t know if some of the depth and nuance has been missed during the translation or if it still wouldn’t have been for me even if it was originally written in English. To me, though, this book isn’t a psychological thriller in the usual sense; it’s less about the crime that’s committed and more about contemporary social issues that can turn ordinary people into monsters. 3★
The Family Next Door by Sally Hepworth [GR]
This was my first Sally Hepworth but it certainly won’t be my last. I’d probably call this a domestic thriller and although I can see the Liane Moriarty parallels, this felt more serious and realistic than Liane’s novels, which to me have a slightly more dramatic and almost humorous feel to them. The women in this book could be the reader’s friends or relatives – all the characters feel real and fully-formed. The family drama at the heart of this novel got completely under my skin and I devoured this in less than a day. Thank you so much to Sally’s publisher Pan Macmillan for sending my a copy for review! 4★
Believe Me by JP Delaney [GR]
I liked but didn’t love JP Delaney’s 2017 novel The Girl Before. I really enjoyed his writing style though and was very keen to get my hands on an early copy of Believe Me at work (it’s not out until early August, sorry!). Similar to TGB, Believe Me has at the centre of the story a woman in a strange situation: a woman is dead and an aspiring actress agrees to go undercover and try to seduce the primary suspect to help crack the case. It’s best to go into this book knowing as little as possible, so that’s all I’ll say. Prepare for a twisty, wild ride! 4★
The Perfect Mother by Aimee Molloy [GR]
This book was so tense and unsettling! I was drawn to this book after Abby at Crime By The Book gave it a great review, and I was thrilled to learn that it’s a Hachette book! I picked up the proof and tore through it over a single weekend. In it, a child goes missing and a group of women try to find him with devastating consequences for all involved. Similar to the Sally Hepworth, this has shades of a domestic thriller but there’s enough of a mystery at its core to make it a gripping psychological thriller as well. Get ready to binge it. 4★

This brings us to the end of my February 2018 reading recap. Have you read any of these books yet? Any you’re keen to get your hands on? Leave me a comment and let me know.