One of my earliest non-children’s film memories is of Meg Ryan standing at the observation deck of the Empire State Building holding a backpack and a teddy bear. My mum was sitting next to me on the couch, fighting back tears as she always did during the happy ending. (I use past tense because that’s what she used to do, but I cannot confirm it’s still a regular occurrence.) This was my first experience of the power of Nora.

Nora Ephron was the director and screenwriter for one of my favourite films of all time: Sleepless in Seattle. The above reference was of course to the final scene in Sleepless in Seattle, and I think it’s a scene I’ve had the pleasure of watching at least 15 times. Honestly, I’ve learnt a lot from that movie and I feel like there’s always something new to learn depending on what’s happening in my life at the time I re-watch it. I have learnt that settling down with someone just because you ought to doesn’t mean you should. I have learnt that there are certain things in life only your female friend/s will understand. Perhaps most importantly, I have learnt that believing in the magic of a happy ending is perfectly okay.

In 1998, nearly 20 years ago, Nora Ephron gave me the film that I always turn to without fail when I’m feeling gloomy. It’s a film that taught me to embrace my love of books and reading, rather than from it, and it instilled in me a healthy skepticism as to the merits of online dating. Let’s take a moment to appreciate You’ve Got Mail. In Mail, Nora passed on to me her unwavering belief in love and romance. She taught me that you can fall in love with the person who isn’t perfect for you, because sometimes those people turn out to be the most perfect of all. Oh, and it’s basically a giant love letter to bookstores and the wonder of reading. I watch this movie when I want to rediscover the beauty of life and of relationships and of Meg Ryan’s wardrobe. Truly great movies allow you to believe that anything is possible, and certainly that’s true in Nora’s world.

Quite a few years later in 2007, my world was turned upside down by another Nora, Nora Roberts. I picked up her new book (at the time) Blood Brothers, and in the near decade since then she’s become by far my most-read author. Her Sign of Seven Trilogy and the Key Trilogy (released in 2003 and 2004) opened my eyes to an entirely new genre of fiction that I, as a somewhat shaky and nervous young woman, hadn’t really scratched the surface of: paranormal fiction. I say shaky and nervous here because while the late teens/early 20s period of time in anyone’s life is usually full of self-discovery and developing, I was particularly terrified of myself; a phase I have fortunately grown out of.

Once I had read all of the paranormal Nora I could get my hands on, I discovered her romantic suspense novels. I began with 2004’s Northern Lights and had soon read my way through many of her once-a-year standalone romantic suspense stories. I was absolutely captivated with Nora’s headstrong and brilliant female characters. Though these novels in particular tend to follow a fairly standard formula (woman escapes to a remote location, meets larrikin local man who is always gorgeous, woman resists man, there is a crime and/or drama, the woman and man get close, the woman is brought into the killer’s path, all is well and there is usually a marriage proposal), I can’t seem to get enough of the strong and smart women that Nora brings to life in the pages of her books. These women are driven and independent and don’t let their men define them. The relationships always grow as the characters grow, and though happy fun sexy times happen, the focus isn’t on the sex. The focus is on the hot mess that life is, and how best to navigate whatever is thrown at us. The more I discover about Nora as a person, the more I want to be Nora Roberts when I grow up. 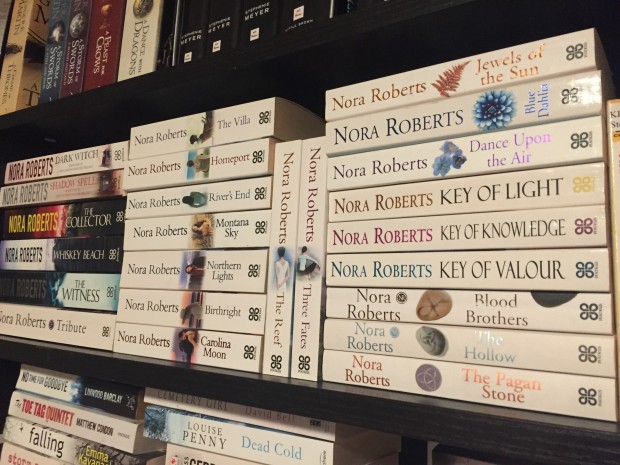 Both my beloved Noras set up real situations and explore how people react and respond and cope. I’m saddened every time I think that I’ll never see another new Nora Ephron film, and I know that one day in the future I’ll have another Nora-shaped hole in my heart that no author will be able to fill. I suppose that’s the beauty of finding creative people whose work you really connect with, though. They enrich your life more than you think is possible, and you spend the rest of your life forever in debt to them for unlocking new emotions within you and changing your life irrevocably.

There are lots of ways that you can fall in love with someone. The true power of Nora is in never giving up the hope that a happy ending is just around the corner.