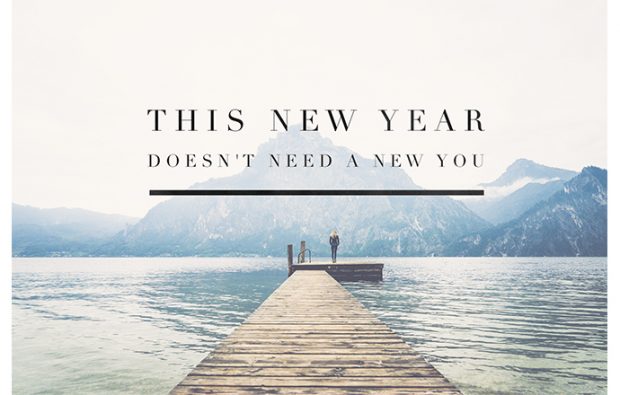 The first week of the new year, this highly anticipated year called 2017, is over and I’ve barely scratched the surface of what I had hoped to achieve this week. You see, on the second-last day of 2016, I came down with what I thought was a light cold but has morphed into an eight-days-and-counting sinus infection. I’m more snot than human (sorry, squeamish folk, but it’s true) and I haven’t had proper nasal function all year. This is not the new me I had intended to bring into the new year.

Unless you’ve been hiding under a rock for the past few weeks (in which case I’m quite envious of you), you’d be familiar with the onslaught of NEW YEAR NEW YOU messaging that has been literally everywhere since early December. A new year is on the horizon, women, so now is the time to shake off that festive indulgence and become a fountain of radiance and vitality as soon as the clock strikes 12.01am on January 1st. Let’s be honest: the new year new you mantra is unambiguously skewed towards a female demographic, and while it may seem like a case of same shit, different day for providing women with opportunities to feel bad about themselves, it feels more damaging in the lead up to a new year.

I’m not going to lie to you, I get sucked in to varying degrees of this each and every December. I look back at the year that was and think Well, shit, that didn’t really go to plan, did it? I found myself in late December 2016 thinking about all the ways I had perceivably failed in the preceding 12 months. Since April, I had gained nearly 10 kilograms. I’d been a shitty blogger. I hadn’t read enough books for people to think I was smart. I felt like I had failed in so many ways, and 2017 would be the perfect time to start fresh.

I truly do understand the appeal of starting fresh in a brand new shiny clean year. There’s so much hope and potential, and it seems far more inspiring to make plans with 12 whole months ahead of you, as opposed to making life-changing decisions in November. My concern is where our motivations to make change come from. By all means, when January 1st rolls around, let go of the previous year if you wish. Let go of the frustration or the anger or the sadness or all of the above that you associate with the year that’s ending, and look forward to starting things fresh in the year that’s beginning. Just please, I beg you, don’t think for a second that the new year needs a new you. It. Does. Not. The new year just needs you. Full stop. It needs your smile, it needs your intelligence and your wit, it needs your thoughts and your opinions. It needs your laughter and probably your tears, but it certainly doesn’t need a new version of you. You are enough just the way you are.

I didn’t fail in 2016, and neither did you. Gaining weight isn’t a failure. 2016 was a hard year for so many people, and personally I had the most stressful and unsettling year of my life. With that said, gaining weight sits firmly at the bottom of the list of things I gained. I gained a happier and healthier relationship. I gained more appreciation for the friends and family that stick by me. I gained a lot of great books. I gained a sense of mental peace and calm. I didn’t lose weight, but a did lose a lot of the baggage that was making me feel stressed and anxious, and holy heck I’d rather lose that than weight on my thighs any day.

A new year is a great time to set new goals and challenges for yourself, but so is a new month, a new week, or even a new day. Your life won’t magically fall into place at the beginning of a new year, and your life won’t spiral out of control if you find yourself lamenting your lack of progress towards whatever you had planned at the end of the first week of 2017. There are still 51 weeks of 2017 to come, and hopefully many more wonderful years after that. Your life can be constantly evolving if that’s what you want, but make sure you’re making change for you.

I hope to accomplish many great things this year. I want to blog more and read more and connect with like-minded people more. I want to buy a car so I can go on lazy weekend drives and go to the beach. I want to stay on top of my health and not feel like I’m limping towards the end of the year once the sun begins to set on 2017. I want to say no to people and things that will stress me out. I want to eat pizza and drink wine and take care of myself, not for anyone else, but for me. I hereby refuse to feel incomplete because I don’t have visible abs, or feel inferior about my appearance just because I don’t match up with what society has become accustomed to see as desirable. The me that 2017 has met is doing just fine, thank you very much.

So here’s to 2017! The year of not giving a single solitary shit (not one!) about making a new you, or a better you, and instead finding happiness in just being you. Make plans and set goals if there are parts of your life you’d like to change, but always remember that this year doesn’t need a new you. 2017 is lucky to have you.