Those of you who have been following my blog for a while will know that I love S.J. Watson. I read Before I Go To Sleep back in 2012 and it’s safe to say that it was one of those life-changing books for me. BIGTS, Watson’s debut novel, was released in 2011 and has since been published in over 40 countries and turned into a film starring Nicole Kidman and Colin Firth. I’ve waited patiently for nearly four years for a second novel, and earlier this year my patience was rewarded with access to an advanced reading copy of Second Life.

Second Life is the story of London-based Julia, her husband Hugh, her adopted son Connor, and the aftermath of her Paris-based sister Kate’s death. Prior to her death, Kate, who was Connor’s biological mother, had been putting pressure on Julia and Hugh to allow her to have custody over Connor again; however, Julia and Hugh were reluctant to agree. Kate’s death is ruled accidental but Julia struggles to recover from it and makes contact with her sister’s flatmate in Paris, Anna.

Anna wants to give Julia the closure she so desperate craves, and she opens up about Kate’s online activities; Kate was regularly meeting men online for casual sex. Julia becomes obsessed with the idea that someone Kate met online was responsible for her death, and at first she logs on to websites as Kate, but soon progresses to opening her own accounts under a secret alias. Online, she meets the enigmatic Lukas, who encourages her to leave her safe world behind. Soon enough, Julia learns that some boundaries aren’t meant to be crossed, and that danger could be much closer to home than she could ever have expected.

Julia was a struggle to follow. By all accounts, at the beginning of the novel, she had a perfect life. Sure, it was safe, but she had built it that way. She had a flexible and enjoyable job, a happy marriage, and a pleasant but sometimes difficult teenage son. Unfortunately, all her relationships felt hollow to me, like Watson almost had to signpost her ability to be a good wife/mother/sister/friend. It shouldn’t be a struggle to make a character seem like a halfway decent person. Julia is overly trusting, which some reviewers seem to find naive and hard to believe, but this fits with her personality type. Her life is safe and vanilla — what reason does she have to mistrust others? It’s her self-destructive tendencies that frustrated me the most. When her life rapidly starts to fall apart around her, she doesn’t learn from her mistakes. They get repeated over and over again, which does become tiresome after a while. She is repulsed by her sister’s online life initially, but barely hesitates when it comes to her own involvement online — why? Watson passes it off as an obsessive need to understand what happened to her sister, but her rapid about-face regarding online relationships was hard to swallow. Many authors are able to write female protagonists who don’t irritate readers with silly decision-making skills, and second-half Julia let the book down overall for me.

This is a relatively dark and twisty novel, which is what fans of Watson’s first novel would have hoped for. It raises some important questions about online sexual escapades and persuades readers to proceed with caution when relationships move from the virtual world to the real world. Much will be said of the ending being lazy and indecisive, but I enjoyed it. So many novels that fall into the psychological thriller genre have painfully flat endings, but it would seem that Watson hasn’t forgotten how to end a novel with a bang.

It had the potential to be darker and twistier than it was, but while reading Second Life I couldn’t help but feel that Watson was consistently exercising a degree of caution. I have a love/hate relationship with second novels, especially when I am so attached to a debut, and Second Life reminded me why I feel this way. The plot, characters, and conclusion all feel 75% cooked, and that extra 25% is needed throughout much of Second Life. While it’s good, it could have been great, and I feel it will ultimately let many of Watson’s fans down.

On a different note, as much as I enjoy the cover design work that goes on at Text Publishing in Australia, I much prefer the international cover for this title: 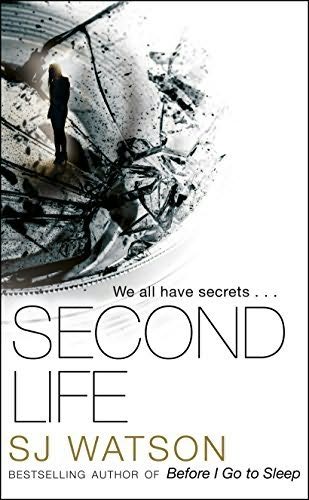