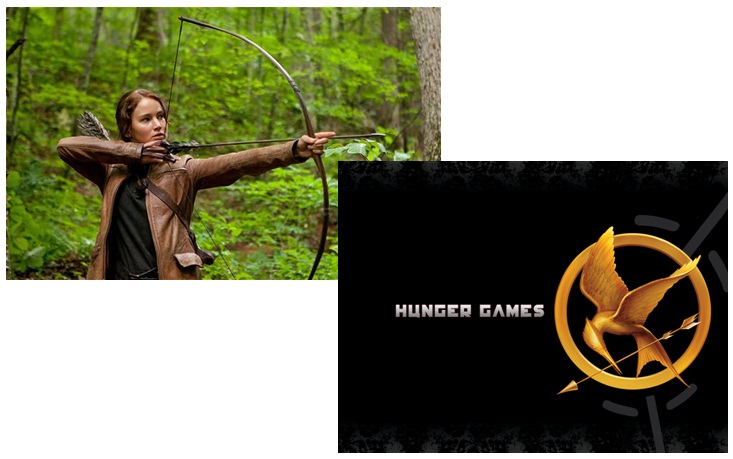 After the debacle that was the Twilight phenomenon, I can honestly say I was reluctant to venture into the world of the Hunger Games trilogy. Dubbed the ‘new Twilight’, Suzanne Collins’ books and film seem to produce the same frenzied hysteria in fans and the divide between Team Peeta and Team Gale (Peeta and Gale being the two love interests of the protagonist, Katniss) is as much, if not more, brutal than the Team Edward vs Team Jacob rivalry. Now forever immortalised on the silver screen, the Hunger Games film has stormed the box office and is indeed, thus far, the highest grossing film of 2012. Relax, film nerds, the best films of 2012 are yet to come… Nevertheless, the Hunger Games has captured many a heart and mind, and I finally decided to find out why. It was over before it began – I made it 82 pages into the first book and gave up. It was a slow start to what I had imagined would be a fast-paced, full-of-action novel. The writing was dreadful. I didn’t really like any of the characters. Disheartened and thoroughly disappointed, I went and saw the movie and was instantly moved and captivated by the plight of Katniss and Peeta and the people of Panem. But what spurred this complete and utter reversal  in my opinion?

For the uninitiated, the story takes place in the post-apocalyptic Panem, or what used to be North America. The population of Panem either live in the Capitol, a highly affluent and advanced city of flamboyantly dressed people, or in one of twelve Districts who are under hegemony of a totalitarian Government. Roughly 75 years before the events in the first book, the Districts attempted a rebellion, which ultimately failed and a thirteenth District was destroyed in the process. As such,  the stark contrast between the lives of those in the Capitol and those in the Districts is monumental; while Capitol citizens enjoy a life of privilege and excess, citizens in the Districts lead lives of repression, starvation and deprivation. Each District is highly skilled in a specialised industry – for example, District 3 specialises in technology, District 4 in fishing, and District 12 in mining (mainly coal). A majority of the major characters come from District 12. As punishment for the acts of their predecessors, every District must provide a boy and a girl tribute aged 12 or older to compete in the Capitol’s annual Hunger Games, a literal fight to the death where only one can be crowned the Victor. Because all the others die. Nice. 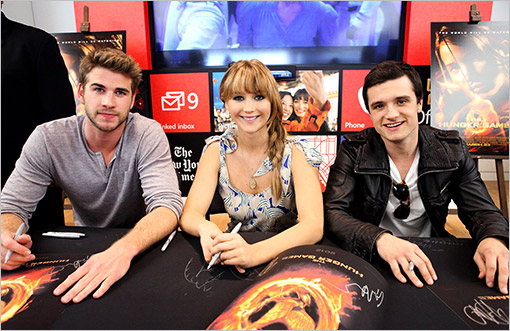 Liam Hemsworth as Gale, Jennifer Lawrence as Katniss, and Josh Hutcherson as Peeta.

So we join Katniss Everdeen and co. for the 74th Hunger Games when Katniss volunteers to take the place of her little sister and Peeta is unlucky enough to be the male tribute. It’s a fascinating concept in an eery, not-impossible-to-imagine future, and the movie took the best bits of the story and ran with them. For almost 3 hours I was completely captivated. So, naturally, I had to know what happened. To say that I bolted home to begin reading Catching Fire is a slight over exaggeration, but not entirely untrue. It was an exceptional plot, relatively well executed (save for Collins’ poorly refined writing style – readers must constantly remind themselves that the books are written for young adults) with a spine-chilling twist. You see, to mark every 25 years following the failed rebellion (known as Quarter Quells), the Capitol produces an extra-perverse Hunger Games. Example: one year, double the number of tributes were taken. 48 children dead. Really great people. The third Quarter Quell twist was superb. The action towards the end got a bit too overwhelming, but it was fast-paced and exciting and everything I had expected book one to be. And then I hit Mockingjay.

I don’t like to write bad reviews; in fact, I actively search for positives in everything I read. But I struggle with Mockingjay. It reminds me of undercooked food – so much time and effort goes into the preparation, the smell is incredible, but when you try to eat it, it’s just not there. You needed more time. To say that Collins rushed through the book is an understatement – it’s a downright ridiculous excuse for a conclusion to an incredibly complex story. Instrumental characters who feature heavily throughout the series are barely dealt with. The final, climatic scene goes by untouched. Strange actions from certain characters aren’t explained. It seemed to be a bit of a theme across all three books, building the action up so much and then rushing right through it, and I could handle it until Mockingjay. I felt cheated. I was angry. And the worst part for me was that the one storyline Collins attempted to resolve was the least important one.

In a story about war, oppression, sacrifice, and hardship, amongst many other things, all Collins truly resolved was which boy Katniss picked. Don’t get me wrong, Katniss’ back-and-forth relationship with Peeta and Gale is a steady theme throughout the series, and obviously needed resolving. But the thing that angers me most is that nothing else is truly resolved. You wouldn’t want to get me started about how poor a role model Bella Swan is for young girls, and I truly believe that Katniss is a strong (although mildly unlikable) young woman who girls can, to some degree, aspire to. And I know that Collins (hopefully) didn’t mean for this to happen, but I can’t help feel that the ending suggests that the most important element of the story was the romance. And. It. Clearly. Was. Not. Sure I had some mildly aggressive views towards which guy I thought Katniss would pick, but by the end, after all the manipulation from the Capitol, I wanted a straight answer. I will never get that answer. There are other characters I had an emotional vested interest in – what happened to them? I’ll never know. What I do know, definitively, is that after all the fighting and trouble, Katniss ended up with *INSERT NAME HERE*. It’s not enough.

I truly believe this will be one of the rare occasions where the movies are better than the books. I can only hope the writers of Mockingjay hear our cries for answers and attempt to rectify on film the mess created at the end of the book. May the odds be ever in our favour.