When I was in high school, there was one word that sent shivers down my spine… discourse. It’s a dirty, horrible word that English teachers adore. The word seemed to work its way into every assignment and exam, and we all hated it. There is one assignment that stands out as the most bearable and it consisted of watching a film and analysing how technical effects work to promote a specific shudder discourse. I chose Darkness Falls and analysed how moviemakers create what is effectively a dark and scary mood using techniques to influence how an audience responds. I couldn’t help but think back to this assignment when I worked my way to the climax of Susan Hill’s 1983 thriller and ghost story The Woman in Black.

Isolated location? Check.
Mysterious sightings and sounds? Check.
A shadowy figure lurking in the dark? Check.
All the atmosphere for a spine-tinging story? Check!

Gothic. That’s the word I would use to describe these elements, and The Woman in Black is the epitome of gothic fiction. At just over 159 pages, it is not a considerably lengthy story, but the content is so exquisitely and richly described, one feels as though they have been reading a story two or three times the length. The language used by Hill is refreshingly polished without being unreadable; her eye for detail and seemingly effortless capability to transport the reader into the heart of the story makes this an engrossing and enjoyable read. And boy does she pack in the gothic elements.

Arthur Kipps is the narrator of the story (being told in first person makes it more involved perhaps) and we meet him on a chilly Christmas Eve as his family sits around the fire telling ghost stories. Arthur appears to be a highly secretive and reserved man, and does not indulge his family with his story; and yet his story is slightly more chilling than the rest, for it is based on a troubling personal experience from many years ago.

What follows is a masterfully told ghost story that doesn’t let the reader go until the final dramatic scene. It takes a great deal of precision to spook a reader with words, and The Woman in Black does so with all the grace and poise of famous gothic authors, Emily and Charlotte Bronte. In fact, the description of the isolation and power of the moors is quite reminiscent of Wuthering Heights, but with a more modern take (given the 130+ year difference, this is not unexpected). And throughout the haunting novel, some questions remain. Who is the ghostly woman in black? Why is she here? And why do the townspeople of Crythin Gifford seem so reluctant to give our protagonist any information on the subject? The questions are answered in spectacular fashion, and I urge you to read this brilliant novel.

In fact, I suggest you do so soon. Because a certain actor who plays a certain wizard is set to continue his main-character-in-a-novel adaptations when The Woman in Black is released later in 2012. Exciting! 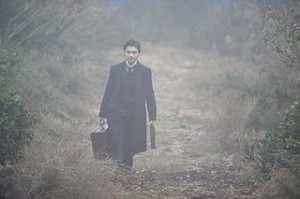