Welcome to my 2016 Annual End of Year Survey! Jamie at Perpetual Page Turner has posted her 7th annual end of year survey, and this is my first time doing it. As I’ll soon explain, 2016 wasn’t my best year for reading or blogging. I’m happy to review the year that was in order to prepare better for the year that is on its way.

Without further ado, my 2016 Annual End of Year Survey.

2. Number of re-reads: None. I don’t have the time to read all the new books that I want to read, let alone have time to re-read. I don’t know how you crazy re-readers do it.

3. Genre I read the most from: Crime/thriller. Naturally.

1. Best book I read in 2016: This is really hard, but I’d probably say The Dry, closely followed by Before the Fall.

2. Book I was excited about and thought I was going to love more but didn’t: The Secret Place by Tana French. I remember being super excited about this book in 2014 but I never got to it, so I picked it up after I finished The Trespasser and it took me quite a long time to get fully invested in it. It was a good book, but in my opinion was way too long.

3. Most surprising (in a good way or bad way) book I read: The Fence by Meredith Jaffe. I am so not the target market for this book, but it was the perfect Sunday afternoon read and I’ve recommended it to a couple of people since who have also really enjoyed it.

4. Book I ‘pushed’ the most people to read (and they did): Probably The Dry or Before the Fall. I loved them both so much, and recommended them over and over again in 2016.

5a. Best series I started in 2016: Who’s Afraid? by Maria Lewis. I’m over the moon that book two is nearly here.

5b. Best sequel of 2016: Gemina by Amie Kaufman and Jay Kristoff. I’m close to saying that I enjoyed it more than Illuminae!

5c. Best series ender of 2016: Kings Rising by C. S. Pacat. As far as I know it’s the only series ender I read this year, but even if I’d read 100 of them I reckon this would still have been the best.

6. Favourite new author I discovered in 2016: Mhairi McFarlane. She’s not a ‘new’ author, so to speak, but she was new to me and I’m rationing her previous novels so I don’t read them all in one hit.

7. Best book from a genre I don’t typically read/was out of my comfort zone: Blankets by Craig Thompson. It’s the first graphic novel I’ve read cover to cover, and it certainly won’t be the last.

8. Most action-packed/thrilling/unputdownable book of the year: Samuel Bjork’s I’m Travelling Alone, which I listened to via audiobook. I became low-key obsessed with this story.

9. Book I read in 2016 that I am most likely to re-read next year: We’ve established that I’m not really a re-reader, but if I feel myself getting ‘stuck’ with where I am and what’s going on in my life, I’d be inclined to pick up The Red Car by Marcy Dermansky again. Nothing says ‘don’t settle’ like reading about a fictional character’s abandoned (and then reignited) hope.

10. Favourite cover of a book I read in 2016: I loved the cover of Goodwood by Holly Throsby. but only liked the actual story about half as much.

11. Most memorable character of 2016: Tommi Grayson from Who’s Afraid?.

12. Most beautifully written book read in 2016: The Paper House by Anna Spargo-Ryan. While at times I didn’t feel smart enough to truly understand this novel, every word felt careful and deliberate.

13. Most thought-provoking/life-changing book of 2016: The Life-Changing Magic of Not Giving a F**k by Sarah Knight. Between that and the various hygge books I flicked through this year, I’m approaching 2017 with a far more relaxed and balanced attitude.

14. Book I can’t believe I waited until 2016 to finally read: Full Dark, No Stars by Stephen King. I’ve owned this book for years and never picked it up until 2016, and discovered my new novella, 1922.

16. Shortest and longest books I read in 2016: The Vegetarian by Han Kang (definitely not smart enough to fully enjoy this book) and Gemina by Amie Kaufman and Jay Kristoff.

17. Book that shocked me the most: It’s a tie with The Couple Next Door by Shari Lapena and Behind Her Eyes by Sarah Pinborough. Both were truly great books up until their absurd and ridiculous endings.

19. Favourite non-romantic relationship of the year: Antoinette Conway and Stephen Moran in The Secret Place and The Trespasser.

20. Favourite book I read in 2016 from an author I’ve read previously: Truly Madly Guilty by Liane Moriarty. Reviews of this were mixed, largely because it was deemed not as ‘explosive’ or ‘shocking’ as her other books, but I devoured it eagerly nonetheless.

21. Best book I read in 2016 that I read based SOLELY on a recommendation from someone else: The Simple Plan by Scott Smith. I doubt I’d have been aware of this book without the recommendation.

24. Best world-building/most vivid setting I read this year: The Last Days of Jack Sparks by Jason Arnopp, particularly in the exorcism scene in the church.

25. Book that put a smile on my face: The Unexpected Everything by Morgan Matson.

26. Book that made me cry or nearly cry in 2016: Swear on This Life by Renee Carlino, because it was so bad.

27. Hidden gem of the year: The Midnight Watch by David Dyer. This book about the ship that could have come to the Titanic’s rescue captured my attention from the beginning and didn’t let me go.

28. Book that crushed my soul: That’s a bit dramatic, but I’d say Skylarking by Kate Mildenhall.

29. Most unique book I read in 2016: Nutshell by Ian McEwan. I’d never read a book told from the perspective of an unborn baby, and I don’t know if I ever will again.

30. Book that made me the most mad: The Girls by Emma Cline. It was beyond over-hyped and I found it to be a genuinely massive letdown.

1. New favourite book blog I discovered in 2016: I found Crime by the Book via Instagram, but her blog is also wonderful.

2. Favourite review that I wrote in 2016: I only wrote one long review in 2016 (which is utterly hideous!) so I’m going to have to say I’m Travelling Alone because it’s all I’ve got.

3. Best discussion/non-review post I had on my blog: My no-bullshit ways of surviving periods of extreme stress. It didn’t have loads of engagement, but I was proud of it.

4. Best event that I participated in: Probably the Sydney Writers Festival. I didn’t get to too many other events this year, but 2017 will be a whole different story…

5. Best moment of bookish/blogging life in 2016: Having this blog and re-igniting my passion to write just before a new year begins.

6. Most challenging thing about blogging or my reading life this year: The middle of 2016 was one of the most challenging periods of my life, and both my blogging and reading life suffered. I then fell into a massive reading slump in October, wherein I only read one book in five weeks.

7. Most popular post this year on my blog: Books published in 2016 that you should know about | PART ONE.

8. Post I wish got a little more love: Trying to make peace with Monday.

9. Best bookish discovery: It’s a tie between the app Litsy and the podcast All the Books.

10. Did I complete any reading challenges or goals that I had set for myself at the beginning of this year? I did not. Ahh well, 2017 is only a few hours away!

2. Non-debut book I am most anticipating in 2017: Apparently Jane Harper has a new book coming and I will absolutely devour that as soon as I can get my hands onto it.

3. Debut book I am most anticipating in 2017: It’s a tie between See What I Have Done by Sarah Schmidt and Startup by Doree Shafrir.

4. Series ending/a sequel I am most anticipating in 2017: Book three in The Illuminae Files.

6. A 2017 release I’ve already read and have recommended to everyone: Ragdoll by Daniel Cole. 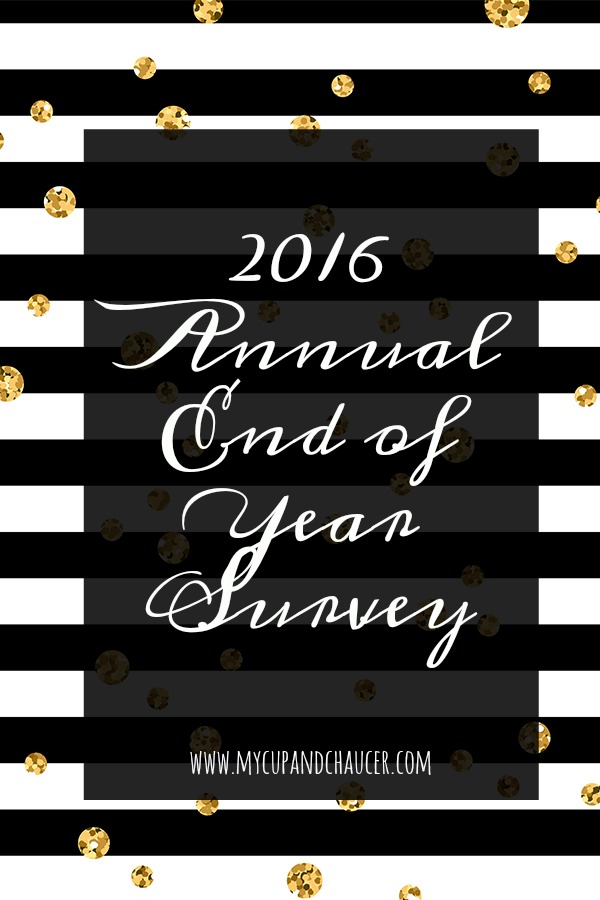