My May 2017 reading review is on the short side because I was overseas for a third of the month and didn’t get a lot of reading done while I was away. Evidently preparing for an almost one month long period off work is also quite stressful, so not much reading was done before I left either. I was quite happy with what I did read, though, so let’s take a look. I read more than what’s shown in the photo… evidently the only thing worse than my reading this month was my photograph! 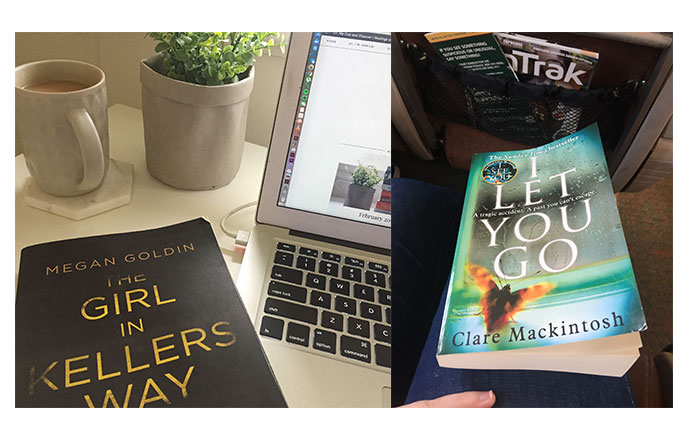 You Are A Badass by Jen Sincero [GR]
I listened to this as an audiobook and I think I enjoyed it far more in that format than I would have otherwise. For the most part, it felt like a much wiser older sister giving advice on how to relax and let things go. I don’t fully buy into all of Jen’s tips and recommendations, but I do strongly believe in the power of our thoughts and internal dialogue at shaping the way we see ourselves and where we are heading in life. Some of the visualisation sections lost me and were a little bit too woo-woo for what I can handle, but her overall focus on keeping ourselves accountable and loving ourselves really resonated with me. I pinched some of her quotes as affirmations and on the whole I feel a bit less self-sabotagey, and some days that’s all you can ask for. 4★
The Dark Lake by Sarah Bailey [GR]
I wanted to love this book more than I did, and I do feel sorry for any moody and atmospheric Australian crime novel that’s ever published again because of my overwhelming devotion to The Dry, but I couldn’t find a way to like the protagonist Gemma, the lead detective, and that’s where things went wrong for me. The tension in the story very much relies on issues from the past, but this never feels fully developed and as a reader, I found it hard to connect with the story in the way I think the author intended. I wanted to find out the answer to the mystery, but I didn’t get invested beyond that. If the author returns to Gemma in her sophomore novel, I hope we’re given a deeper look at her thoughts and motivations. 3.5★
The Girl in Kellers Way by Megan Goldin [GR]
This was easily one of my favourite books of 2017 so far. It had a slow start, but once I was in, let me tell you, I WAS IN. This was another debut Australian thriller novel and after the somewhat underwhelming debut I read before it, I was wary. The biggest difference between these two books is that at the end of Kellers Way, I wanted to spend more time with Detective Melanie Carter. She’s a diligent cop whose motivations are easy to understand and support — she just wants to get the job done. Like many thrillers these days, this book contains multiple points of view that become increasingly important as the multiple storylines converge and ultimately race towards a spectacular ending. The tension was palpable and although I found the ending satisfying, I also didn’t want it to end; in my opinion, that’s the sign of an excellent book! 5★
I Let You Go by Clare Mackintosh [GR]
I read this book in a single sitting on the train between Portland and Seattle, and I think reading it in one hit made me like it more than I would have if I’d read it over multiple sessions. If I had to describe this book in one word, I’d use clever. I came to a point around halfway through the book where I found myself furiously flipping back over the pages to work out whether I should have seen what was coming. I don’t want to say too much and risk ruining the twist, but I recommend that if you do read this book, try to read the second half in one go. I promise you it will be hard to put down! 4★
A very thriller-heavy month where I didn’t get much reading done at all. I bought a lot of books while I was overseas, so hopefully my reading reviews will be fuller in future. Until next month…