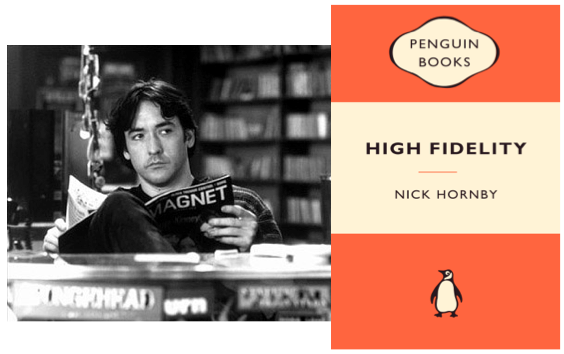 A good compilation tape, like breaking up, is hard to do. You’ve got to kick off with a corker, to hold the attention, and then you’ve got to up it a notch, or cool it a notch… and you can’t have two tracks by the same artist side by side… oh, there are loads of rules.

Up until quite recently, I was one of ‘those people’ who hadn’t read and/or seen High Fidelity. It wasn’t that I was trying to be difficult; I had just never felt the urge to see what Nick Hornby’s story was all about. After discovering the website http://tape.ly, I had a conversation with a colleague about creating the perfect mix tape. Assuming I’d read and/or seen High Fidelity, said colleague started ranting about the genius of the story’s protagonist, Rob. I think I broke a little of his spirit when I announced that I had no idea what he was talking about and sure enough, by the end of the day, I was going home with a Penguin Classics version of the book (I am always a book before movie person). I’ll admit it to you – I’m angry at myself for waiting so long. Not only did I learn the value of a well-thought-out list and how to make the perfect mix tape, I also came to realise that it’s okay to be normal, painfully normal even, as long as you surround yourself with the people and things that bring you joy in an otherwise lacklustre and underwhelming world.

Rob Fleming is normal. He owns a record store named Championship Vinyl in London (Chicago for those of you more familiar with the 2000 film) and he has just been dumped by a girl named Laura. We meet Rob in a particularly dark period of his life. An avid list maker, Rob recounts to the readers his top-five break ups and I think what makes Rob likeable in his particular state is that almost everyone can relate to at least one, if not more, of the breakups. Not getting enough under the sheets action? Oh hey there, every teenage boy ever. Not feeling cool or unique enough to retain someone’s interest? Hello, just about everyone. Through Rob, we are able to celebrate our plainness and normalness. When you’re going through life without any discernible oddities or rarities (at least, that you yourself can see), it’s easy to think that everyone else has the capacity to be more interesting, more engaging, more fascinating and more downright desirable than you could ever possibly be. When you are so remarkably average in every way, Rob can teach you how to celebrate your little nuances and habits, because there is most certainly someone out there who will discover you for who you are and want to celebrate you too.

A while back, when Dick and Barry and I agreed that what really matters is what you like, not what you are like, Barry proposed the idea of a questionnaire for prospective partners, a two- or three-page multiple choice document that covered all the music/film/TV/book bases.

This brings me to one the book/film’s most important messages: what you like defines you more than what you are like, because in a meta sort of sense, what you like will influence what you are like more than you might think. One of the central themes of the book is music. At Rob’s store, Rob and his two employees, Barry and Dick, talk about music, make lists about music, judge people for their taste (or apparent lack thereof) in music and, on the odd occasion, play music. For them, music is their life. Their preferences define who they are, where they have come from, how they have grown and where they are going. And once you start to think about it a little, the evolution of your music taste can tell a lot about you. Over the years I progressed from listening to the Spice Girls and Aqua and hit a punk rock phase in high school (think: Simple Plan, Yellowcard, Blink 182, the Offspring), and have moved on to the more relaxed pastures of indie folk, where I spend my time surrounded by Bon Iver, Sigur Ros, Band of Horses and others. It’s not hard to draw some links from my music tastes to my behaviour. I went through a rebel phase in Years 9 and 10 and my music taste significantly reflected my moods and feelings. I feel like I’m growing up to be a soft and gentle sort of person, and slow, relaxing sounds are what I like around me most. Rob doesn’t go into his changing music taste in much detail, but he does choose to categorise his enormous record collection autobiographically (no mean feat) so only he can know where to find particular records. It also gives him the ability to understand how he can move from one artist to another, and in a broader sense, how his taste changes over time. Similarities and differences in music taste with other characters are not just viewed as minor personality differences – they are catastrophic, all-encompassing deal breakers that seem to directly influence how one character sees another. No book or film I have read or seen prior to or since High Fidelity has written such a poignant love letter to music as this.

It seems to me that if you place music (and books, probably, and films, and plays, and anything that makes you feel) at the centre of your being, then you can’t afford to sort out your love life… Maybe we all live life too high a pitch, those of us who absorb emotional things all day, and as a consequence we can never feel merely content: we have to be unhappy, or ecstatically, head-over-heels happy, and those states are difficult to achieve within a stable, solid relationship.

The message isn’t clear to just music lovers; it’s also there for lovers of all art forms. At one point Rob asks “what came first, the music or the misery?” and it becomes clear that the human condition is so intrinsically linked to creativity and artistic impression that no matter your poison, so to speak, what you like ultimately becomes what you are like. But what are the deeper consequences of this? Well, as the above quote suggests, some people become too involved and can never simply enjoy the moment. We are too engrossed in trying to achieve the quintessentially perfect moment that the truly beautiful and magnificent moments pass us by. Not every moment is going to be like one you read about, or watched in a film, or heard in a song. It’s going to be flawed and messy at times, but it’s real and it’s unique. It’s the only life you’re going to get – there’s no point in waiting for something magical and perfect to come by. You make the magic and perfect yourself, otherwise you’re forever trapped in a cycle of wishing for something that will never come.

None of us had the wit or the talent to make them in to songs. We made them into life, which is much messier, and more time-consuming, and leaves nothing for anybody to whistle.

Ultimately, High Fidelity isn’t about settling for mediocre. The moments that are perfect for you might not be perfect for anyone else, but they are your moments and will remain so forever. Life isn’t going to be like some love song with a defined beginning, middle and end… In fact, as Rob shares with us, life often doesn’t go anything like we thought it would. What you can learn from Rob, however, is to realise what makes you ‘you’ – your pros, your cons, your flaws, your interests, who you are at your very core – and to find whatever it is that makes you the happiest you that you can be. People might not write about it, or sing about it, or turn it in to a film, but they will notice the little sparkle in your eye and the smile that slowly creeps upon your face and they’ll know, at least in this moment, that you are truly happy.