I’m sure you’re all familiar with the bedside book stack. It’s the stack of books beside your bed that you unwittingly build over days or weeks or months, until the stack grows so high that it threatens to topple over and squish you in your sleep and you need to move the books along. Death by books… not the worst way to go, but what a shame it would be to go before you get a chance to read them all!

This is the start of a semi-regular series on My Cup and Chaucer. I’ll take a photo of the books stacked next to my bed from time to time and provide a brief description of each book and, with any luck, it will inspire me and motivate me to read them faster. Some of them will be old books I haven’t read yet, some of them will be books that have just been released that I’m currently reading, and some will be books that aren’t published for another month or two.

I hope you find something in my bedside book stack that takes your fancy! 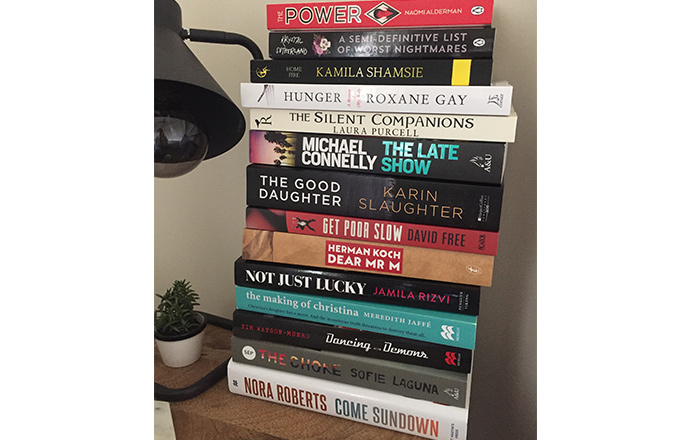 The Power by Naomi Alderman
I always have the best of intentions when books that sound interesting win awards. I think to myself yes, this is the one I will read! Truth be told, that hardly ever happens, so who knows when I’ll get to this one. Anyway, The Power recently won the Baileys Women’s Prize for Fiction, if you didn’t know. It’s a dystopian science-fiction novel and in it, women have developed the ability release electricity from their fingers and in turn become the dominant gender. Power is literally in the hands of women. Actually just writing this makes me want to pick it up, so maybe I’ll get to it sooner than I think.
A Semi-Definitive List of Worst Nightmares by Krystal Sutherland (available September 2017)
I wasn’t the world’s biggest fan of Krystal Sutherland’s debut novel Our Chemical Hearts, but this (her second) sounds really good and, hopefully, quite different. The novel is about Esther, a girl whose grandfather was cursed by Death. Because of this, everyone in her family has been doomed to suffer one great fear in their lifetime and will ultimately die as a result of the fear as well. Esther hasn’t worked out what her fear is yet but when she is pickpocketed by her classmate, she is forced to figure it out sooner than she expected to. I don’t know, it sounds cute so I’ll give it a go.
Home Fire by Kamila Shamsie (available October 2017)
I haven’t read any of Kamila Shamsie’s other books but this was recently presented by the Australian publisher as one of their top picks for Christmas. It sounds incredibly timely and moving, although I am sad that we’re not getting the American cover here as well. Below, the US cover is on the left and the Australian/UK cover is on the right. What do you think? 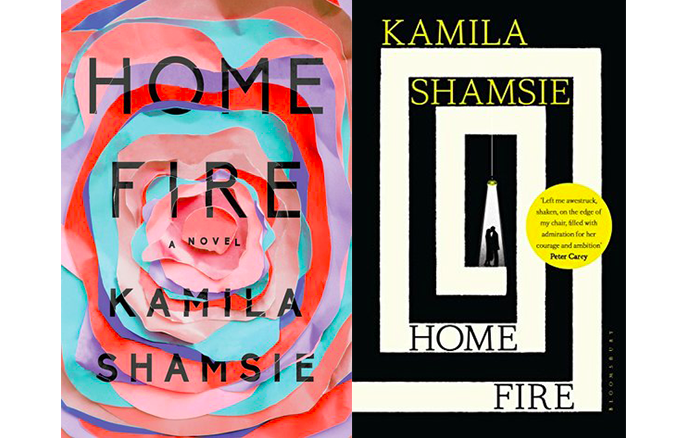