Like The Dark Knight Rises earlier this year, my great friend Katia over at And Cut! Film asked me to guest review Skyfall. The review on her site can be found here. If you can’t be bothered clicking, read on my lazy friend!

Note: This review contains minor spoilers. If you are worried about plot points being revealed, please err on the side of caution and do not read this until you’ve seen it.

2012 marks the 50th anniversary of James Bond on screen and Skyfall, the 23rd installment, is a brilliantly conceived and expertly executed film that cements Daniel Craig as—in my opinion—the very best Bond of them all. After the disappointment that was Quantum of Solace and with the hype surrounding Bond’s golden anniversary, there is no doubt the pressure was on Director Sam Mendes (Revolutionary Road, Jarhead) to deliver. More of Bond’s past is revealed than ever before, shedding some light on his pre-007 life; in a Nolan-esque way, Mendes and Craig have added some much needed depth to the lovable but seemingly shallow and promiscuous, bordering-on-raging-alcoholic, spy. Cracking performances from Ben Whishaw as the delightfully nerdy and charming Q, Judi Dench as the dependable matriarch M, and Javier Bardem as the eccentric villain Silva, highlight the strength of this star-studded ensemble to bring us back into the Bond world once more.

From the spectacular opening sequence in Istanbul to the thrilling conclusion in the Scottish Highlands, Skyfall is a visual delight for audiences. Cinematographer Roger Deakins (No Country for Old Men, The Shawshank Redemption) brings his trademark impeccable attention to detail and polished style to deliver easily one of the best looking films of 2012. Despite the inclusion of Bond’s usual globetrotting escapades, a considerable amount of Skyfall is set in Britain. The opening ceremony to the 2012 London Olympics unequivocally reminded us that Bond is, first and foremost, a British institution and Skyfall integrates tensions found in modern British society to reinforce what is ultimately the underlying theme of the film: old versus new.

MI6 is under attack. Crucial information has been taken, which if released will threaten the identity and subsequently, the lives of agents across the globe. An explosion at MI6’s Millbank HQ destroys an entire floor of the complex, taking a number of agents out with it and forcing the organisation underground. Intelligence coordinator Gareth Mallory (Ralph Fiennes) is questioning the relevance of the entire agency.

At the very centre of the mess is M; a presumed-dead Bond returns to investigate and despite taking 70 minutes to make an appearance, comes face to face with Silva – a bleached, boisterous and unbalanced figure from M’s past with one heck of a score to settle. 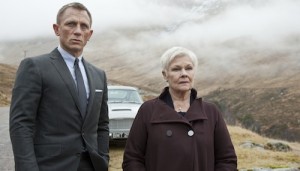 Skyfall’s greatest strength is in its ability to balance the old with the new and using some refreshingly classic espionage elements, reminds us that despite significant advances in modern technology, old knowledge is still entirely relevant to society. Indeed, maybe now more than ever. With some subtle hat-tips to vintage Bond (and some not so subtle inclusions), Mendes has simultaneously resurrected the series and validated its existence moving forward. Perhaps the only gripe from an audience perspective is the length, but the unexpectedly witty script moves the slow parts along, towards the gripping and highly emotional climax.

At the end of the film, we are informed that Bond will be back soon; to that, we can only say, “yes please”. If Quantum of Solace was Bond’s midlife crisis, the red sports car has well and truly been put to rest and Bond is back, better than ever.